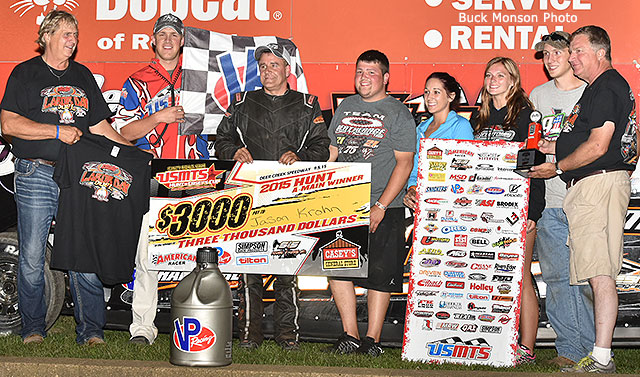 SPRING VALLEY, Minn.—A caution with seven laps to go Saturday night at the Deer Creek Speedway proved to be the downfall of Jason Hughes and a blessing for Jason Krohn as Krohn zipped into the lead one lap after the restart and drove away to score his second USMTS win in three nights.

From the pole, Hughes took control at the start of the race and continued to set the pace through changing track conditions and lapped traffic until 33 laps into the race when the yellow flag waved and slowed the pace.

By now, Krohn was running third after starting tenth while Zack VanderBeek was solidly in second. VanderBeek selected the outside lane for the double-file restart, and Krohn immediately disposed of him before flying by Hughes on the low side to lead lap 34.

From there, Krohn cruised to victory.

“A lot of times not starting up front is an advantage, and tonight proved to be one of them,” Krohn said while standing in victory lane for the second time this week after also winning on Thursday at the Fairmont Raceway. “Kind of had to move around through lapped traffic and the other cars that we were racing, and the bottom was taking just a little more traction in spots so we were able to find that. On the restart when Zack gave me the bottom, we were able to use that to our advantage.

Following a hiatus from modified racing since February, the 2007 USMTS National Champion has been white hot in his black No. 7 MB Customs machine. He sat out Friday’s show, winning his last two starts over this Labor Day Weekend.

Krohn also addressed his good fortune the last 72 hours with that of his teammate, Rodney Sanders, who has recorded his three worst finishes of the Hunt for the USMTS Casey’s Cup during the last three days.

“We work hard and Rodney has helped me a lot chassis-wise and with set up. It’s unfortunate what took place with him, but it is what it is. The one thing I can assure you is that we will keep racing, we will keep working and we will keep our heads up.” 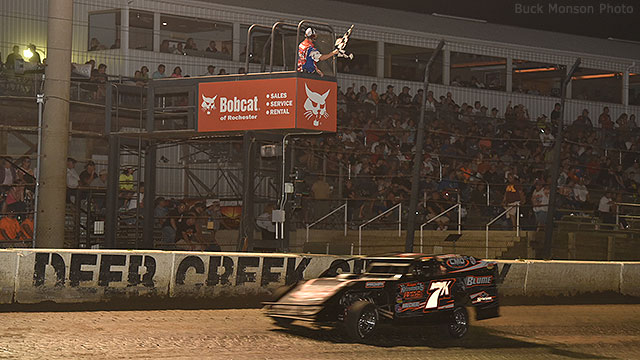 VanderBeek also found his way past Hughes to nail down the runner-up spot, but his third-place finish was enough to propel Hughes into the points lead by 10 markers over Sanders with just two points races remaining.

Dereck Ramirez was fourth in Saturday’s main event while Joe Duvall was fast all night long and banked his first top-five finish of the ‘Hunt.’

Sanders came from 17th to finish sixth while Stormy Scott roared from 23 on the grid to seventh at the end of the 40-lap nightcap. Brent Larson, Jesse Glenz and Brad Waits rounded out the top 10.

Only the top four—Hughes Sanders, Stormy Scott and Sobbing—are mathematically still alive with a chance to become the 2015 USMTS National Champion.

Sobbing clinched the USMTS Rookie of the Year title on August 17, and the winner in two other points battles was decided tonight.

In the quest for the COMP Cams Engine Builder of the Year, Geddes Racing Engines has clinched the title while the MB Customs chassis has the 2015 USMTS Manufacturers Championship.

The five-night Labor Day Weekend swing wraps up on Sunday at the Cresco Speedway in Cresco, Iowa, for the next-to-last event in the Hunt for the USMTS Casey’s Cup powered by S&S Fishing & Rental. The Holley Iron Man Series featuring USRA Stock Cars and USRA B-Mods, along with USRA Hobby Stocks will complete the four-class card. Hot laps begin at 6 p.m. with racing to follow.

Tickets are $17 for adults 18 years old and up, $10 for youth ages 13-17 and admission is free for children 12 years of age and under. Pit passes are $30 per person. Fans can get coupons good for $2 off adult general admission at Casey's General Stores locations in Cresco, Decorah, Lime Springs, Ossian, New Hampton and Waukon.

Cade Dillard and his No. 97 Snickers machine will be greeting fans at 601 2nd Ave. SW in Cresco from 12-2 p.m. Listen to KCZE 95.1 FM to hear live broadcasts from Dillard’s appearance.

Showing finishing position, starting position in parentheses, car number, driver, hometown, chassis/engine builder, laps completed and money won. The top 12 drivers in passing points accumulated in the heat races were locked into the “A” Main, with the top 8 re-drawing for starting positions 1-8.

(R) = Rookie of the Year contender.