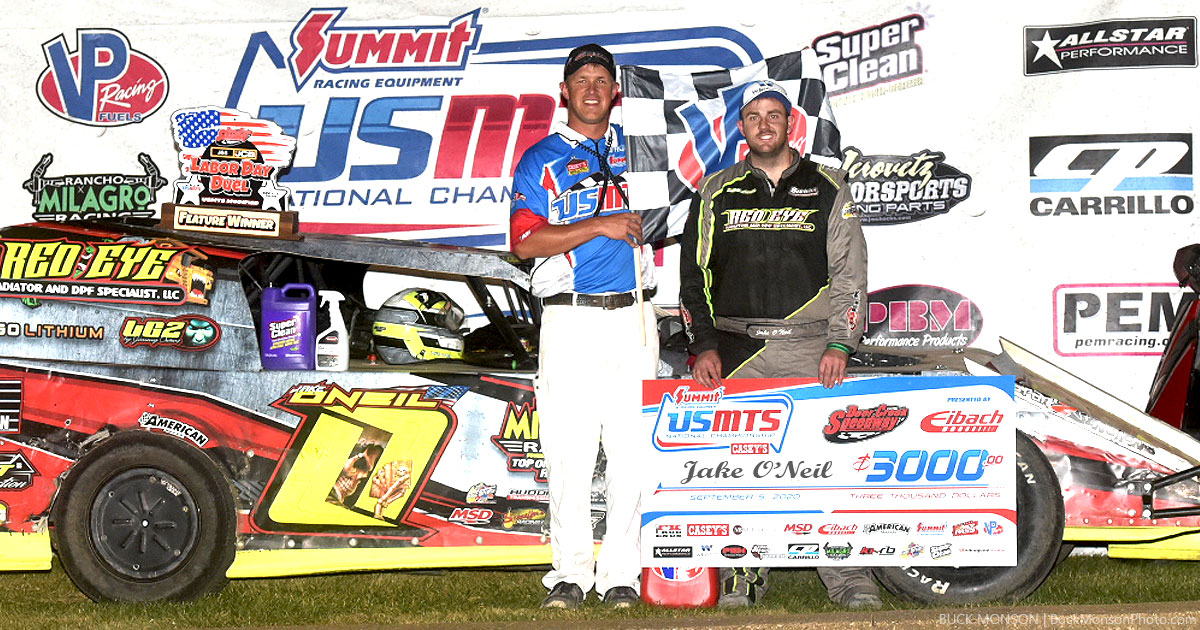 Jake O’Neil zeroed in on the lead at the drop of the green flag and proceeded to run away and hide from the field in Saturday’s caution-free 40-lap main event to cap the 15th Annual J&S JCB USMTS Labor Day Duel at the Deer Creek Speedway.

His career-first win at ‘The Creek’ was the eighth of his USMTS career and worth $3,000 to the 28-year-old from Tucson, Arizona. It ties him on the all-time wins list with Ryan Ruter, Tommy Weder Jr., Ricky Thornton Jr. and Brandon Davis, who finished third behind O’Neil in the main event and ended his three-race win streak at the track.

O'Neil shared the front row with polesitter Matt Leer and took off from the pack at the start. With no cautions to aid his pursuers, O’Neil built a lead of more than four seconds at one point in the race, eventually beating Tanner Mullens to the finish line by 1.228 seconds.

Behind Mullens, Davis passed seven cars to squeeze onto the podium while Leer held on for a career-best fourth-place finish before being disqualified in post-race technical inspections for an unapproved rev-limiting chip.

More than any other racetrack in America, Saturday’s show was the 113th time the Summit USMTS National Championship fueled by Casey’s circled the Deer Creek Speedway, but due to an unpredictable 2020 season it was also the longest hiatus from the high-banked 3/8-mile clay oval in Spring Valley, Minn., since the first race in 2002.

The series last competed here September 21 of last year during the final night of the 21st annual Featherlite Fall Jamboree. This year’s Jamboree kicks off in just 20 days on Friday, September 25.

O’Neil is the 44th different driver to take home a USMTS trophy from the Deer Creek Speedway.

This will be the eighth visit by the USMTS since 2007 when Jason Krohn won the inaugural event here. Jake Neal picked up his first and only USMTS victory the following season, and Ryan Gustin won here in 2009.