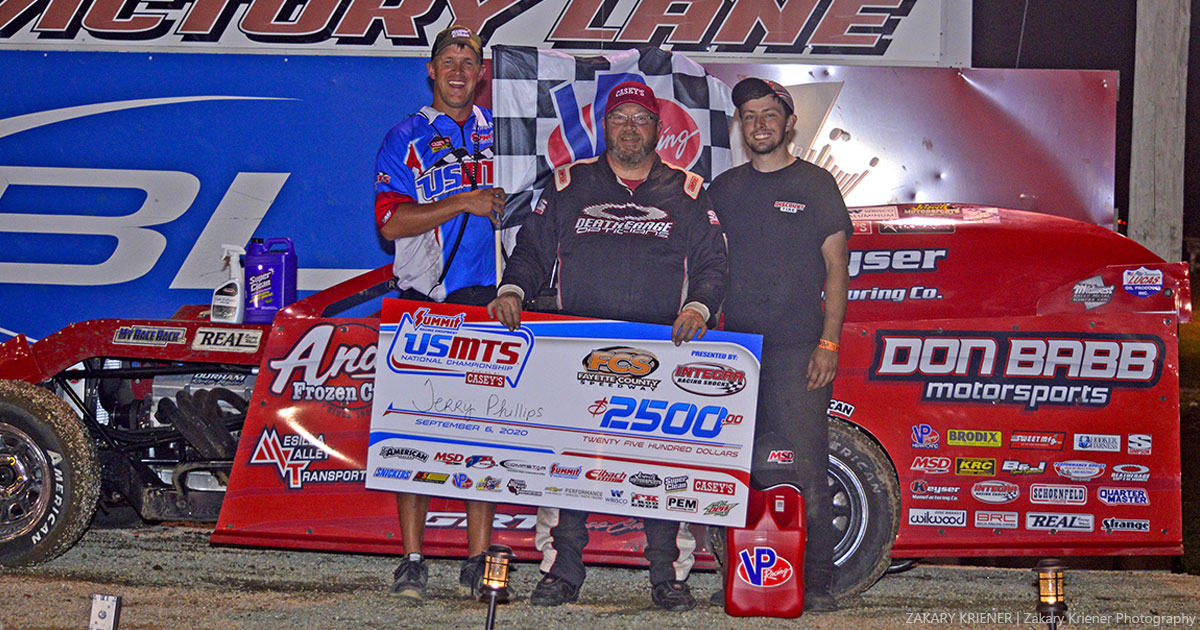 Terry Phillips dug deep when he had to and muscled his way to victory Sunday in the 8th Annual USMTS War in West Union presented by Integra at the Fayette County Speedway.

The 54-year-old ace from Springfield, Mo., took his familiar red No. 75 GRT Modified to the top side of the semi-banked 3/8-mile clay oval with six laps complete and powered around early leader Zack VanderBeek to make the winning pass.

VanderBeek, who won this event in 2016, held the point through the first two of three cautions. The first happened on lap three when points leader Rodney Sanders lost control in turn four. Mirroring his bobble, Jake O’Neil made the same mistake three laps later.

Running in the top five at the time, both were lucky to avoid contact but were relegated to the back of the field for their respective restarts.

Phillips shot past VanderBeek when the green flag reappeared, but ‘The Z-Man’ battled back and stayed close but Phillips was eventually able to seize control for good on the seventh lap.

The yellow flag waved for the final time on lap 10 with the final 30 circuits staying green and full throttle.

Multiple wheel-banging excursions for position were happening behind Phillips as he reached lapped traffic for the first time on the 22nd lap. This allowed Tanner Mullens, who got by VanderBeek on lap 14, to narrow the gap between himself and the race leader.

After a near run-in with a back-marker that allowed Mullens to pull to Phillips’ rear bumper, the leader quickly navigated through the traffic and increased his advantage over Mullens. He was never challenged again as he sped away to the 33rd main event win of his career with the Summit USMTS National Championship fueled by Casey’s.

The win tied him with Jason Krohn for 10th on the all-time USMTS wins list. Krohn won the first USMTS feature contested in West Union, Iowa, in 2007. That event, however, was held at the long-since-closed Echo Valley Speedway across town.

“The track had some character in it but it was a pretty good racetrack. You could run both lanes and that’s all we ask for,” Phillips said in victory lane. “Congratulations to these guys that prepare this track—I know it rained a bunch.

While Phillips put the $2,500 winner’s check in his pocket, Mullens crossed the finish line second while VanderBeek held on for a solid third-place effort.

Although their original sixth and tenth starting positions won’t tell the whole story on paper, Sanders and O’Neil kept the fans entertained and their fellow competitors frustrated with a pair of impressive runs from the back of the pack after their earlier stumbles.

Sanders was all the way back up to fourth just past the halfway point, but a trio of fast machines ahead of him and no more yellow flags left him there at the checkered flag.

O’Neil, meanwhile, was right there with Sanders and bounded back to complete the top five. Californian Lance Mari had his best effort of the year with a sixth-place finish while Jason Hughes, Lucas Schott, Dereck Ramirez and J.D. Auringer rounded out the top 10.

Louisiana-Texas tripleheader in crosshairs: Delayed nearly five months due to the pandemic panic, the series will finally embark on a three-race adventure through Louisiana and Texas next Friday, Saturday and Sunday, Sept. 11-13.

From there, it’s about a 40-minute commute to the Boothill Speedway in Greenwood, La., for Saturday’s 5th Annual USMTS I-20 Showdown presented by Champ Pans.

After a three-hour westbound drive on Sunday, the swing reaches the checkered flag at the RPM Speedway in Crandall, Texas, for the 2nd Annual USMTS North Texas Nationals presented by Penske Racing Shocks.

2020 campaign nears completion: With the recent cancellation of the Southern Dirt Track Championship at the Texas Motor Speedway Dirt Track, the USMTS lost another stop due to COVID-19. Now, following the Sept. 11-13 tripleheader through Louisiana and Texas, just two events and five nights of action remain.

Another victim of the China-born virus that invaded America, the 22nd Annual Featherlite Fall Jamboree presented by Chevrolet Performance has been shortened to two days instead of three. The mega-event takes place Friday and Saturday, Sept. 25-26, at the Deer Creek Speedway in Spring Valley, Minn.

The 2020 USMTS national champion will emerge from the 2nd Annual Summit Southern Nationals presented by Super Clean at the RPM Speedway in Crandall, Texas, on Thursday, Friday and Saturday, Nov. 5-7.

Showing finishing position, starting position in parentheses, car number, driver, hometown, chassis/engine builder and laps completed. All drivers advanced to the Casey’s “A” Main and lined up by passing points earned in the heat races with the top-8 drawing for starting positions 1-8.