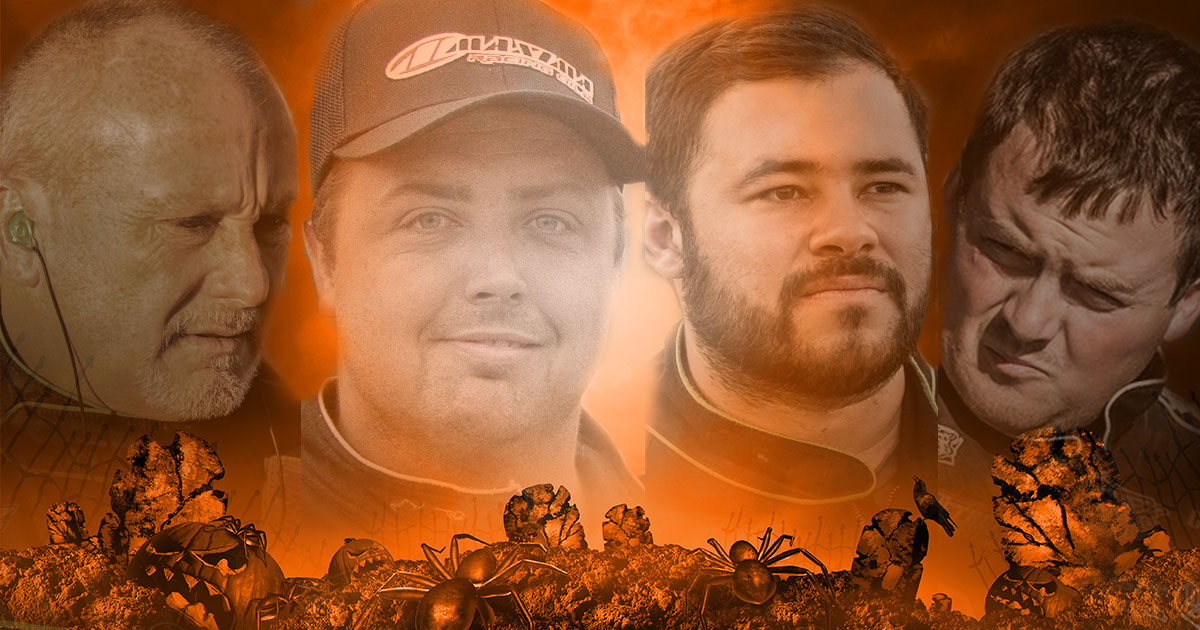 We’re now just hours away from the biggest four days in dirt modified racing history when four monstrous events happen Halloween Weekend with the inaugural running of the Modster Mash.

With more than $35,000 to the winner(s) of the four USRA Modified feature races and more than $5,000 to the USRA B-Mod winner(s), this simmering cauldron of cash is real money for real racers that is all treats and no tricks.

And with nearly $200,000 in prize money to be doled out in about 100 hours or real time, the event has drawn one of the most prolific fields of competitors in the history of dirt modified competition.

Thursday, October 29: Drivers will get their first chance to race for great money in the inaugural “King of the Ring” at the Tri-State Speedway in Pocola, Oklahoma, with $10,050 to win and $700 to start for USRA Modifieds.

There's also a $2,000 top prize up for grabs for the USRA B-Mods with at least $100 to start the main event and $75 for non-qualifiers presented by Drive4JRT.com, SDI and Robert Vinson.

For more information check out tri-statespeedway.com.

For more information check out lakesidespeedway.net.

Saturday, October 31: The inaugural Mel Hambelton Ford Modified “Spooktacular” presented by Park City will take place at the 81 Speedway in Park City, Kansas, with a $10,031 paycheck going to the winner and a minimum of $700 to each starter in the main event.

For more information check out race81speedway.com.

Sunday, November 1: The road leads to the Humboldt Speedway in Humboldt, Kansas, for the first-ever “Halloween Hangover at The Hummer” featuring a $5,000-to-win, $320-to-start feature for USRA Modifieds and USRA B-Mods once again sharing the spotlight and racing for $1,000 to win.

USRA Tuners are also on the racing card.

For more information check out humboldtspeedway.com.

Among the nearly 70 USRA Modified entries already are racers that bring résumés with 50 current and past national championships in various sanctions and divisions.

Owens, who collected his fourth Lucas Oil Late Model Dirt Series crown this year to add to his four UMP Modified national titles, has more than 560 dirt late model and modified victories in his career.

Both will be piloting mounts from the Ramirez Motorsports stable in Woodward, Okla., which owns the team that Owens drives for in the LOLMDS. Sheppard also steered a Ramirez ride in last year’s Grant Junghans Memorial at the 81 Speedway and finished second behind Jacob Bleess.

Every USMTS national champion since 2010 will be in the pits all four nights, led by defending and soon-to-be four-time titlist Rodney Sanders.

Between them they have 410 career feature wins with the Summit USMTS National Championship fueled by Casey’s.

With USRA national points ending Halloween Weekend, Jake Gallardo and Schott are in a nail-biting battle for this year’s crown and the 2020 Summit USRA Weekly Racing Series national champ will emerge on Sunday night.

Here is the complete pre-entry list as of Monday, October 26:

The undisputed best of the best in the world of dirt track racing converge on the Cedar Lake Speedway in New Richmond, Wis., on Thursday, Friday and Saturday, June 17-19, when the Summi…

With a baby boy due any day now, Denise Mullens stayed home in Wichita, Kan., Saturday night but was able to watch online as her husband, Tanner Mullens, performed a last-lap labor-indu…

Friday is payday for Jake O’Neil and the 29-year-old from Tucson, Ariz., deposited another $10,000 into his bank account after a wire-to-wire win in Friday’s main event for …

Fresh off a thrilling three-night Memorial Day Weekend excursion, the Summit USMTS National Championship fueled by Casey’s is back at it this weekend with a pair of $10,000-to-win…