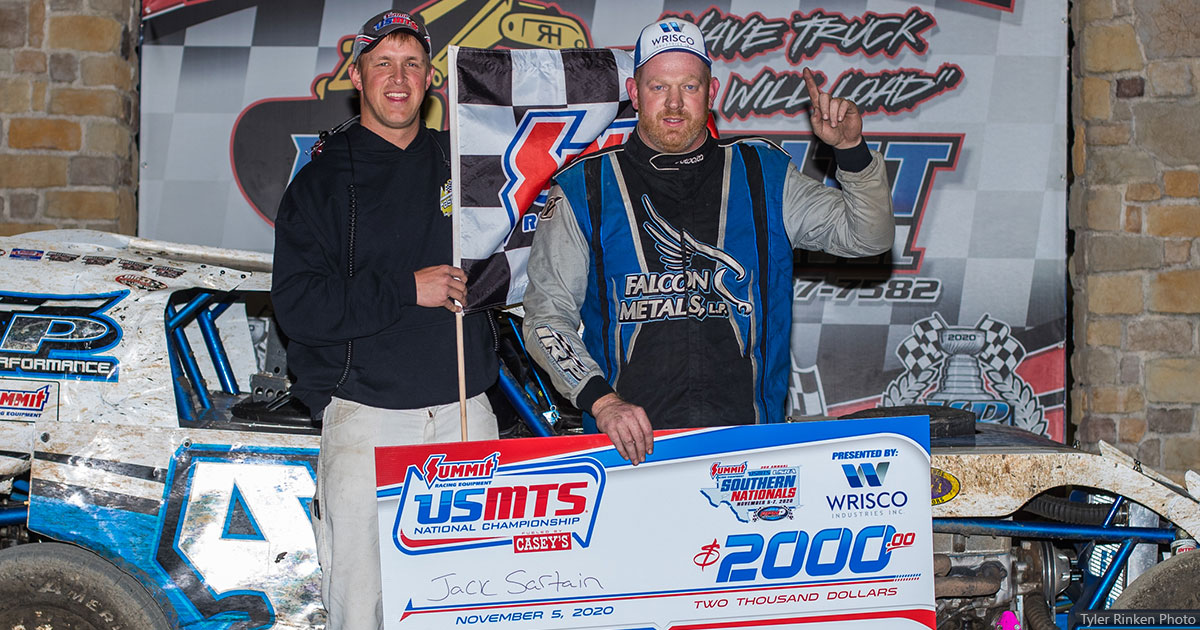 You knew it was going to be a wild night when Sartain and Bobby Malchus both came from dead last to win the first two heat races—it was a sign of things to come in the feature race that saw four different leaders and eight lead changes.

From the outside of the front row, Malchus snagged the lead from polesitter Bo Day when the green flag waved over the sticky fast bullring but Day was able to wrestle the lead away two laps later.

Day, who captured his first USMTS victory on March 6 at the nearby Big O Speedway in Ennis, remained the leader through lap five when the front-end of Fito Gallardo’s racecar washed out and launched him into the left front of Day.

Before another lap could be completed, caution waved for an infield tractor tire that found its way onto the racing surface. Back under green, damage to Day’s machine caused him to spin in front of the field in the first turn to end his night.

Gallardo assumed the lead with Sartain, Malchus, Jason Hughes and Cody Leonard giving chase. Sartain briefly inched ahead of Gallardo to lead lap 8 but the 2015 USRA Modified national champ sped back by Sartain to regain the spot with nine laps complete.

Heavy lapped traffic greeted the leaders on lap 12 and Gallardo was able to put some distance between himself and Sartain for a few laps before they were nose-to-tail again at the race’s halfway point when Gallardo nearly stopped in turn four to keep from spinning.

As he maneuvered between two tire barriers, Sartain shot past to lead Gallardo at the flagstand. Gallardo fought back to the inside as they raced out of turn three but Sartain shut the door when they reached the third turn.

Leonard got around Gallardo the next lap and proceeded to reel in Sartain as the laps wound down. He was glued to Sartain’s bumper for several laps when Sartain’s IRP Race Car got upset in turn four coming to complete lap 33 of 35.

Taking advantage of the opening, Leonard shot underneath and took the lead away with two laps remaining. Sartain, who competed at the RPM Speedway all season long, backed his racecar into the cushion in turn one and launched across turn two, crossing over Leonard and regaining the top spot.

Sartain was back in front when they reached the white flag and kept it low and slow the final lap to secure the $2,000 top prize while Leonard settled for the runner-up position.

Gallardo emerged on the final lap to make it a three-way race for the win and wound up third with 2020 track champion Clyde Dunn Jr. finishing fourth after starting 12th.

Unable to finish the race, Rodney Sanders finished 21st on the final score sheet but officially clinched the 2020 USMTS national championship while Dereck Ramirez, who also dropped out of the race and finished 19th, secured the second spot in the final points.

More to come Friday and Saturday: The RPM Speedway in Crandall, Texas, will host two more nights of the Summit Southern Nationals on Friday and Saturday with a complete program of qualifying heat races and feature events both nights.

USMTS drivers will battle for a $2,000 top prize Friday and Saturday’s championship finale pays $5,000 to win. Meanwhile, Sunoco USRA Factory Stocks will be competing for $1,250 to win Friday and $1,500 to win Saturday while USRA Limited Mods are gunning for $1,700 to win both nights courtesy of Blackwell Construction.

Blackwell will also be auctioning off a race-ready Limited Mod to be given away Saturday night. Tickets will be sold in the grandstands and pits Friday and Saturday and are only $10 per ticket.

The pits open at 2:00 p.m., the drivers meeting starts at 5:30 and racing gets underway at 6:00 both days. However, if the high temperature is more than 70 degrees, all times are one half-hour later that day.

Every lap in every division every night will be broadcast live at RacinDirt.TV.

The 2020 schedule for the Summit USMTS National Championship fueled by Casey’s is highlighted by 40 nights of racing at 25 unique dirt ovals for the 22nd season of competition for the world’s Best of the Best in dirt modified racing.

The undisputed best of the best in the world of dirt track racing converge on the Cedar Lake Speedway in New Richmond, Wis., on Thursday, Friday and Saturday, June 17-19, when the Summi…

With a baby boy due any day now, Denise Mullens stayed home in Wichita, Kan., Saturday night but was able to watch online as her husband, Tanner Mullens, performed a last-lap labor-indu…

Friday is payday for Jake O’Neil and the 29-year-old from Tucson, Ariz., deposited another $10,000 into his bank account after a wire-to-wire win in Friday’s main event for …

Fresh off a thrilling three-night Memorial Day Weekend excursion, the Summit USMTS National Championship fueled by Casey’s is back at it this weekend with a pair of $10,000-to-win…