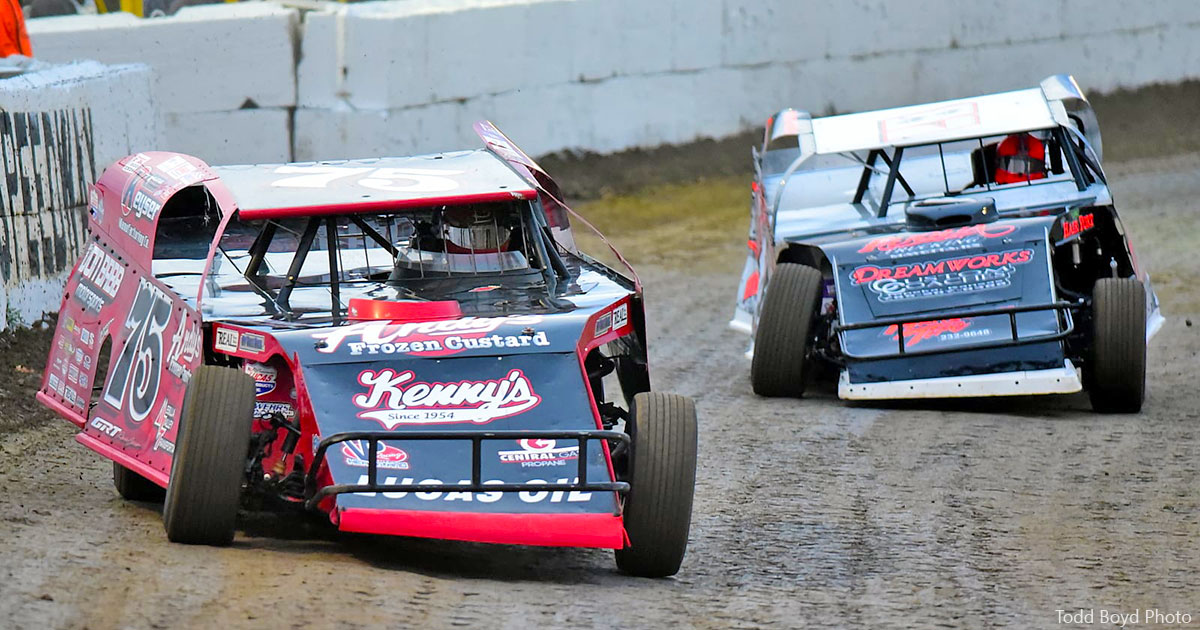 Nearly 200 drivers are pre-entered and more than 100 attended practice night Wednesday in preparation for King of America X powered by Summit and Battle at The Bullring VI driven by G-Style Transport. The titanic #KABOB tripleheader gets underway Friday at 7 p.m.

Too much rain fell on the Humboldt Speedway throughout the morning and afternoon Thursday, forcing officials to postpone opening night festivities and squeeze three nights of racing into two days. Every race planned for Thursday will be completed Friday or Saturday at the 54-year-old 1/3-mile clay oval in Humboldt, Kansas.

The fire-breathing Modifieds of the Summit USMTS National championship fueled by Casey’s will share the spotlight with B-Mods, USRA Modifieds and Medieval USRA Stock Cars on Friday and Saturday.

Friday, March 26: The pits open at 2 p.m. and grandstands open at 5. Racing gets underway at 7 p.m. As originally scheduled, USMTS Modifieds will be gunning for $5,000 to win with Medieval USRA Stock Cars seeking a $1,000 top prize.

Originally slated for Thursday, B-Mods will also have a complete show of heat races and main events on Friday with a $2,000-to-win feature to cap things off. The top 20 in passing points from heat races advance to the A-Main while the next 20 go to the B-Main. Four drivers will advance from the B-Main to create a 24-car A-Main.

Saturday, March 27: Two complete shows will make for a marathon Saturday that will satisfy the horsepower hunger for any diehard race fan. The morning show starts at 10 a.m. Grandstands open and the pits will be cleared at 8 a.m.

Rise ‘n’ shine racing will feature a complete show of USRA Modifieds ($2,000 to win) and Medieval USRA Stock Cars ($750 to win)—both of which were postponed Thursday. Originally slated for Friday, B-Mod gladiators will duel in dual qualifying heats Saturday morning.

All those entering the pits Saturday morning must purchase a pit pass for both shows ($80 for those 11 and older, $50 for kids ages 6-10). Pit passes may be purchased for the evening show only, but not until after the morning show is completed. On the spectator side, grandstands will be cleared following the morning show.

Saturday evening’s championship program starts at 7 p.m. Medieval USRA Stock Cars will be racing for $1,200 to win while B-Mods compete in last chance races and the $10,000-to-win finale of Battle at The Bullring VI. Meanwhile, USMTS Modifieds will have a complete show of qualifying heats and feature races with the awarding of a $20,000 paycheck to the winner of King of America X powered by summit.

Tickets: On Friday, general admission tickets are $25 and seniors (62+) are $20. The same prices are set for Saturday’s morning show. Tickets for Saturday evening’s show are $30 for general admission or $25 for seniors (62+). Kids ages 6-12 get in for $10 at all three shows. Pit passes are $40 Friday while kids ages 6-10 are $25. Children under 6 years of age get into the grandstands or pits FREE all weekend.

If you can’t be at the Humboldt Speedway in person, you can still enjoy every lap of every race in every division on every night of King of America X and Battle at The Bullring VI driven by G-Style Transport at racindirt.tv.

Eight different USMTS drivers have claimed victory in the previous nine King of America blockbusters and the list is a who's who of dirt modified racing.

Ricky Thornton Jr. captured the King of America crown two years ago and is the defending champion of the event after last year’s running was canceled by COVID-19. Reigning and two-time USRA Modified national champion Lucas Schott was the 2018 winner and two-time USMTS national champ Ryan Gustin won in 2013 before he became the first repeat winner at the 2017 event. Zack VanderBeek captured the title in 2016 after a thrilling late-race battle with 2014 race winner Rodney Sanders, Jason Hughes was the 2015 champion, Stormy Scott topped the 2012 event and nine-time USMTS champ Kelly Shryock claimed the inaugural crown in 2011.

In the 53 main events staged here, Hughes has more than doubled his nearest competitor with 13 career USMTS wins at ‘The Hummer.’ Of those entered this weekend, Sanders is his closest follower with four victories here. Drivers with two wins and looking to add to that Friday and Saturday include VanderBeek, Terry Phillips and Johnny Scott while Thornton, Schott, Tanner Mullens and Steve Holzkamper are seeking their second career Humboldt Speedway wins this weekend.

Jared Timmerman notched the biggest victory of his career in 2019 when he captured the fifth Battle at The Bullring, which was the last running due to the pandemic of 2020. Other past winners include Skeeter Estey (2016 and 2018), J.C. Morton (2017) and Shawn Strong (2015).