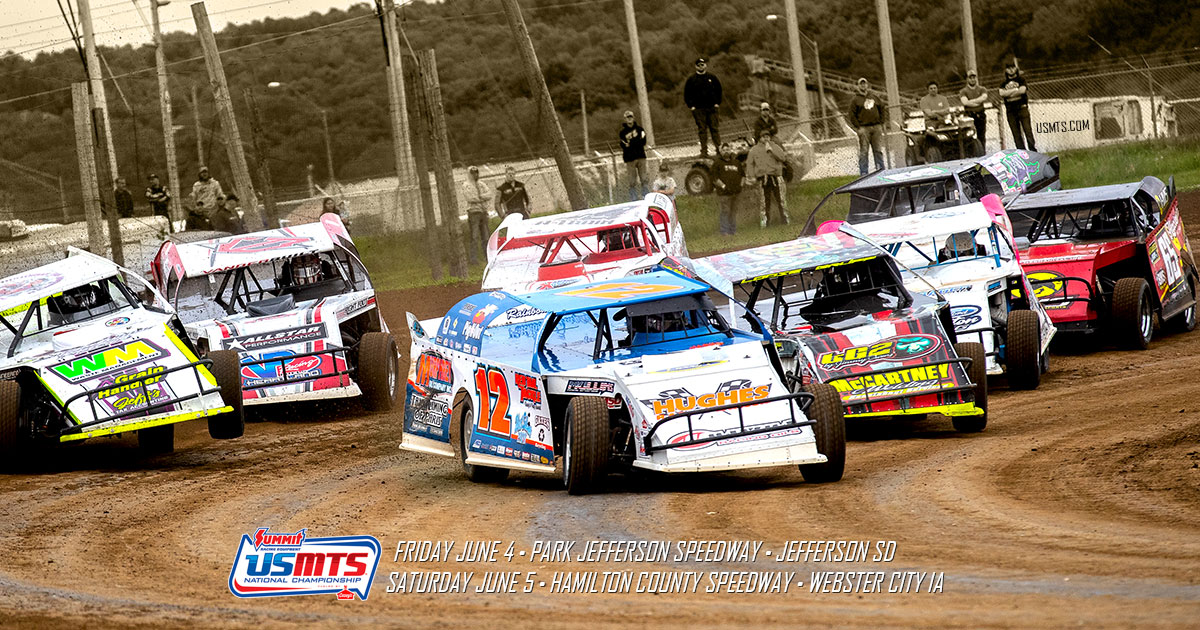 Fresh off a thrilling three-night Memorial Day Weekend excursion, the Summit USMTS National Championship fueled by Casey’s is back at it this weekend with a pair of $10,000-to-win blockbusters at two legendary dirt tracks.

The Park Jefferson Speedway near Jefferson, S.D., will host the tireless USMTS touring titans on Friday, June 4, for the ninth time in series history, and while Mother Nature has been declared the winner three times no racer has been able to visit victory lane more than once.

Joining the program will be Park Jefferson Speedway's J&J Fitting Stock Cars, Sport Mods and Hobby Stocks. Each division will run for $400 to win.

The pit gate will open at 3 p.m. with the spectator gate opening at 5. Hot laps are slated for 7 with qualifications and racing getting the green flag at 7:30.

Hotel rooms are available at the Country Inn & Suites of Dakota Dunes for $85 and Hampton Inn of North Sioux City for $89.

On Saturday, the Summit USMTS National Championship fueled by Casey’s faces east and journeys to the historic half-mile oval of the Karl Chevrolet Hamilton County Speedway in Webster City, Iowa, for another $10,000-to-win show.

It's the birthplace of the USMTS and hosted the first four Fall Jamborees from 1999-2002. Nine-time USMTS national champion Kelly Shryock won the first race on Oct. 7, 1999, while Ron Jones went on to win the next two nights and capture the first Fall Jamboree title.

A trio of Summit USRA Weekly Racing Series classes will be running both nights with national points and padded prize money on the line for Seneca Foundry USRA Stock Cars ($500 to win), stein Heating & Cooling USRA B-Mods ($500 to win), Diamond in the Rough USRA Hobby Stocks ($400 to win) and MyRacePass USRA Tuners ($125 to win). Any class with 22 or more entries gets $100 more to win and $20 more to start.

The pits will open Saturday at 4 p.m., grandstands open at 5, hot laps gets underway at 7 and the green flag waves for qualifications and full-throttle racing at 7:30.