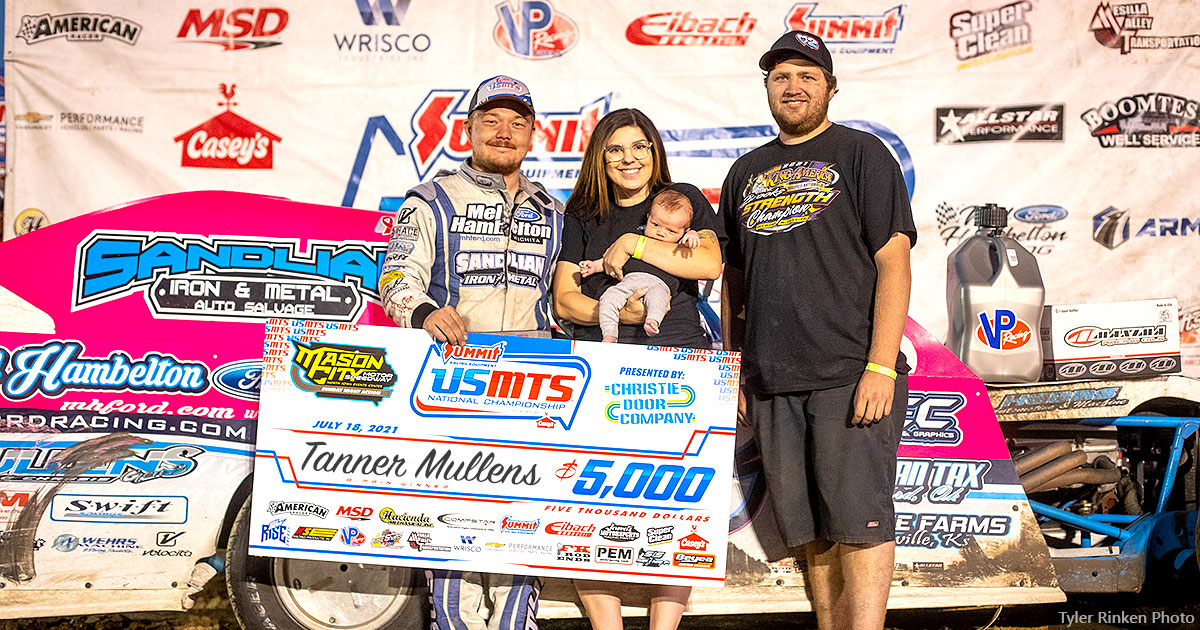 Tanner Mullens capped off a heart-stopping four nights of action for the Summit USMTS National Championship fueled by Casey’s with a victory Sunday evening at the Mason City Motor Speedway.

Iowa’s reshaped and reborn action track lived up to its name with a wild main event that saw Mullens lead 39 of the 40 circuits but never was allowed to take a breath as several challengers forced the 28-year-old from Wichita, Kansas, to maintain his focus the entire distance.

After garnering the Sybesma Graphics Pole Award, Mullens first had to shake fellow front-row starter Jake O’Neil but a miscue exiting the first corner saw O’Neil bobble and plummet to ninth place by the time the field completed the opening lap.

Then, third-starting Rodney Sanders applied pressure to Mullens for a few laps before a hard-charging Brooks Strength flew around the outside to claim the lead at the end of the fifth lap.

Mullens kept the lead change brief as he muscled past Strength in the following turn to regain the top spot.

Strength and Sanders both took shots at Mullens, and although the hairy high side of the former I-35 Speedway was the most preferred line, drivers were able to utilize every inch of the racing surface.

By the halfway point of the race, O’Neil had rebounded to become a factor at the front of the field and was fourth behind Mullens, Strength and Sanders when the race’s first caution occurred with 17 laps in the books.

The yellow flag waved for the third and final time with just three laps to go with Sanders choosing the inside lane for the double-file restart behind the leader.

That left third-running O’Neil with the outside groove which he used to snag second away from the four-time and defending USMTS national champ.

He could not, however, make a run at Mullens who crossed beneath the checkered flag with just under a one-second advantage to improve his yearly earnings by $5,000.

Sanders held on for third while Lucas Schott rebounded from a lap-18 pit stop to garner the fourth spot. He also took home the FK Rod Ends Hard Charger Award for advancing nine positions from his original 13th starting spot.

With his second win of the season, Mullens brought his USMTS career wins total to six and joined Ryan Gustin as the only two-time USMTS feature race winner in Mason City.

After gaining the top spot in the championship standings on Friday and then surrendering his lead to Dereck Ramirez on Saturday, O'Neil was able to regain the top spot over Ramirez with a ten-points cushion (1605 to 1595).

Three for 30 kicks off second half of season: The Summit USMTS National Championship fueled by Casey’s returns to action in August with a trio of blockbuster events paying $10,000 to win each night.

The second half of the 2021 campaign kicks off Thursday, August 5, at the 81 Speedway in Park City, Kan., for the 10th Annual USMTS Sunflower State Showdown.

From there, the series invades the Humboldt Speedway in Humboldt, Kan., for the 15th Annual USMTS Summer Fling on Friday, August 6.

The Best of the Best conclude their 72-hour battle on Saturday, August 7, with the 12th Annual USMTS Slick Mist Show-Me Shootout presented by Foley Equipment at the state-of-the-art Lucas Oil Speedway in Wheatland, Mo.