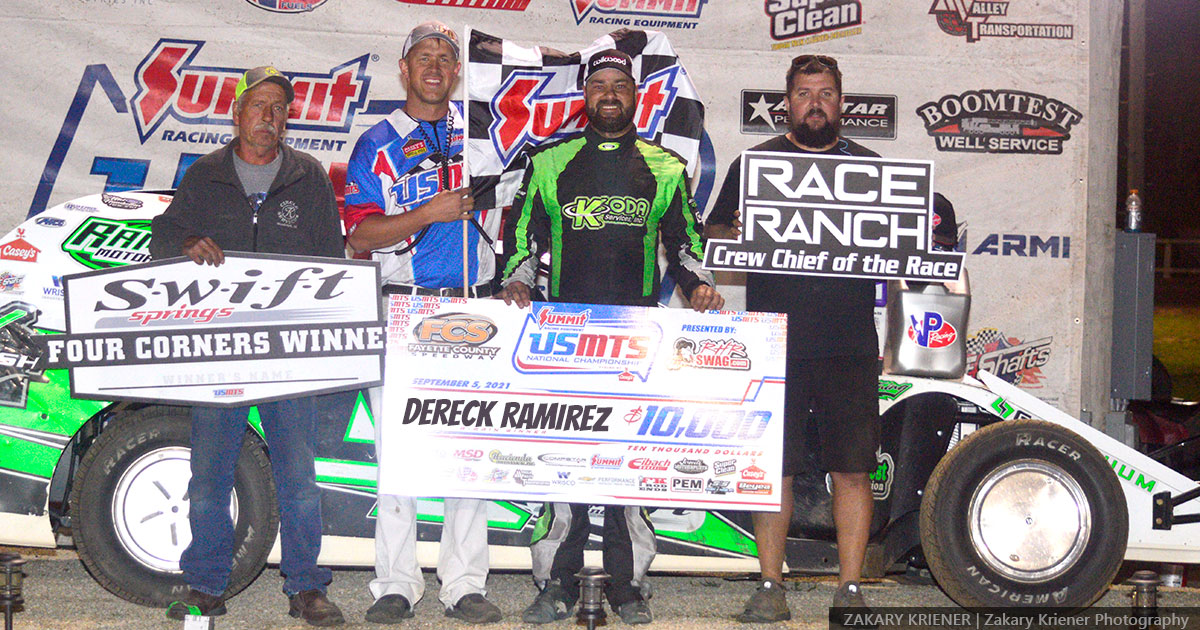 Sunday night’s 9th Annual USMTS War in West Union presented by RHRSwag.com lived up to its name with a nail-biting main event performed by the Summit USMTS National Championship fueled by Casey’s for the elbow-to-elbow fans at the fabulous Fayette County Speedway in West Union, Iowa.

After chasing polesitter Dan Ebert for the first three laps, Jake O’Neil powered past Ebert to lead lap four and began to run away and hide from the pack.

Meanwhile, Ebert had his hands full with Dereck Ramirez as they swapped the second and third spots throughout the first half of the 40-lapper but even two caution flags offered no hope to O’Neil’s pursuers as he distanced himself from the field with each restart.

Except for two of the top three competitors, the rest of the field finally caught a break with eight laps to when Ebert slowed on the front-stretch after losing a tire and wheel.

While under caution for the third and final time, O’Neil ducked into the pits to change a flat tire which left Ramirez at the front to lead the field back to the green flag and O’Neil at the opposite end of the remaining competitors.

Jake Timm, Tyler Wolff, Rodney Sanders and 18th-starting Jason Hughes following Ramirez back to the starting line. Entering the third turn, Wolff—who was running fifth when the yellow flag waved—went for broke and slid up in front of Ramirez.

Wheel to wheel at the flagstand, Wolff led the 33rd lap but Ramirez returned the favor in the first turn and then sailed unchallenged from there to the checkered flag.

“I don’t know if Jake ran over something on the track or not but I saw him with a flat tire there on that caution,” Ramirez said in victory lane. “Sometimes it’s better to be lucky than good but we put ourselves in position to win the race and sometimes that happens.”

As his Cornett-powered Hughes Racing Chassis cooled down, the 34-year-old winner had nothing but praise for Wolff’s attempted winning move.

“On those restarts there’s so many holes down there you kind of get into a rhythm and it's pretty easy to get through them, but on that restart there I kind of went in a little tentative—it’s my own fault. He slid me and took advantage of it but I got him back again. He raced me clean and that’s all we ask for here.”

Four more to score $30,000: After a 48-hour pause, the Summit USMTS National Championship fueled by Casey’s returns to the battlefield this Wednesday, Thursday, Friday and Saturday, Sept. 8-11, at four fantastic facilities in three states.

Action gets underway Wednesday with a $5,000-to-win clash at the 81 Speedway in Park City, Kan., followed by another five grand up for grabs Thursday at the RPM Speedway in Crandall, Texas.

From there, the series makes up a pair of $10,000-to-win events that were washed out in April. On Friday, it’s the 9th Annual USMTS Cajun Clash presented by S&S Fishing & Rental at the Ark-La-Tex Speedway in Vivian, La., and the four-night swing wraps up Saturday with the series debut at The Rev (Revolution Park) in Monroe, La.

Taking dirt to a new level: The 2021 campaign for the Summit USMTS National Championship fueled by Casey’s currently features 34 nights of racing with the winners set to take home over $300,000 in earnings from more than $1 million in prize money earmarked for those shows.