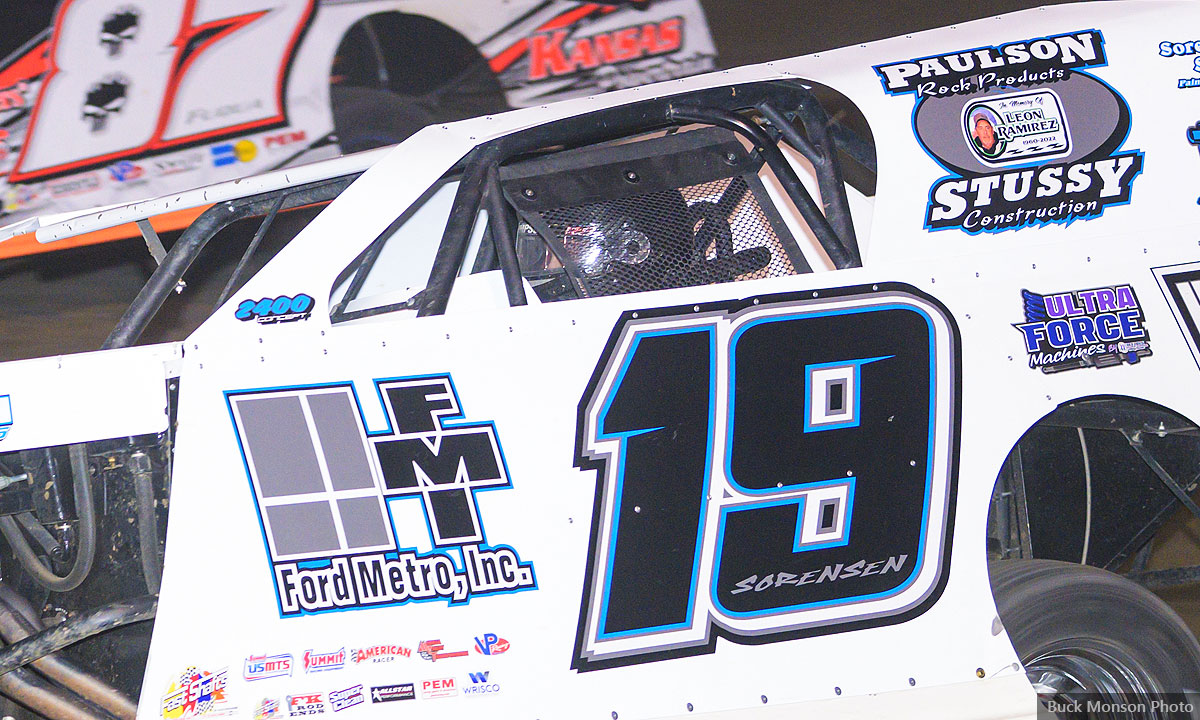 Growing up in the cold winters of Southeastern Minnesota, Dustin Sorensen loved playing ice hockey as a slap-shooting forward.

Rising to the level of top-level youth hockey, Sorensen was on the fast track toward possibly becoming a college recruit. But all the while, another fast-paced sport—one that had deep roots in his family—fought for his attention.

Young Dustin had a knack for racing dirt modifieds. He was winning B-Mod races as a 12-year-old and, by the time he was officially old enough to drive, was ready to graduate into Modifieds. His dad, Mike, had been a big winner in USMTS and USRA Modifieds for several years before hanging up his helmet.

"After high school, I decided that I wanted to stick to racing," Dustin said of the choice he had to make between his two favorite sports. It's been a solid decision as the 21-year-old has become one of the nation's best, leading the USMTS standings with the home stretch of the season beginning.

Sorensen rolls into Lucas Oil Speedway on Saturday for the 13th Annual USMTS Slick Mist Show-Me Shootout presented by Foley Equipment atop the championship chase and on a track that he likes. Second in this race last year, Sorensen swept all three nights of the USRA Modified portion of the 2021 Summit USRA Nationals at the Lucas Oil Speedway.

While drivers in his position often deny thinking about points, Sorensen is honest about his situation, with 15 races remaining in the USMTS season.

"That's our goal, to win the points," Sorensen said. "Every night, I'm trying to at least finish and not put myself in any bad situations. I'll be a little more cautious, but winning is still the main goal, every night.

"I wasn't really expecting to be in the situation that we're in now, but I wanted to be. My goal at the start was to try and make a run at the national points deal."

It wasn't that long ago that Sorensen began racing "Slingshot" cars on a small oval inside the main track at Deer Creek Speedway. After moving into a USRA B-Mod, he said his summers were extremely busy with racing and travel hockey. He said he was "alright" as a hockey player and that his dad wishes he had chosen hockey.

"He's still a little mad I gave it up for racing," Dustin said. "He thought that would have been a little smarter choice, at least when I was a little younger."

Sorensen said he even moved to Omaha as a high school sophomore to play on an elite team, but returned to Minnesota after that season.

"That was interfering with racing," he said of being several hours from home, "so then I moved back home and played regular high school hockey and raced." Eventually, he gave up the skates and stick.

A fan of the NHL's Minnesota Wild, Sorensen said there might be some correlation between the hand-eye coordination that it takes to play hockey and drive a race car, where instant reaction is vital to success. The toughness he learned from hockey, especially on the mental side, is a definite benefit.

"I think it's huge with racing," Sorensen said. "You see guys get on hot streak and then kind of fade for a little while and then are able to come back. Confidence is a huge thing."

Asked about future goals in racing, Sorensen said he doesn't spend a lot of time thinking about it, though driving a dirt late model would be appealing if sponsorship became available. Otherwise, the focus is on the near term.

"We have 15 races left and the next three are what I have on my mind right now," he said.

The three-race swing for the USMTS begins on Thursday at the 81 Speedway in Park City, Kan., and continues Friday at the Humboldt Speedway in Humboldt, Kan.

The event is happening just two months before the 9th Annual Summit USRA Nationals in October, so look for a big car count with O’Reilly Auto Parts USRA Stock Cars and Ozark Golf Cars USRA B-Mods also on the program. The Stock Cars and B-Mods will be running for both Summit USRA Weekly Racing Series national and regional points, as well as Big Adventure RV Weekly Racing Series track points.

Lucas Oil Speedway is considered by fans, drivers and industry insiders to be one of the top five racing facilities in the nation. Located in Wheatland, Missouri, approximately an hour from Springfield, Missouri, and just an hour and a half from the Kansas City metro area, the "Diamond of Dirt Tracks" lives up to its title.

Lucas Oil Speedway is located at Highways 83 and 54 in Wheatland, Mo. A campground with shower and bathroom facilities is also available. With its entrance located just outside the pit gate this sprawling scenic camping facility will continue to enhance the racing experience for fans and competitors alike.

To purchase tickets for any event on Lucas Oil Speedway's schedule, or to inquire about camping information, contact Admissions Director Nichole McMillan at (417) 295-6043 or via email at nichole@lucasoilspeedway.com.

As is customary, the 81 Speedway provided yet another instant classic for the Summit USMTS National Championship presented by RacinDirt, and Terry Phillips provided fans with his 37th v…

Race fans and racers alike are invited to join Mel Hambelton Racing us for the USMTS Open House on Thursday, Aug. 4, from 11:30 a.n. to 2 p.m. Food, prizes and lots of fun are in sto…

With just 15 races left until one driver reaps a $100,000 paycheck, the Leon Ramirez Trophy and title of Summit USMTS National Champion, the USMTS gladiators return to action with a gears ‘n’ guts tripleheader this Thursday, Friday and Saturday, Aug. 4-6. The action starts Thursday, Aug. 4, at the 81 Speedway in Park City, Kan., before moving to the Humboldt Speedway in Humboldt, Ka