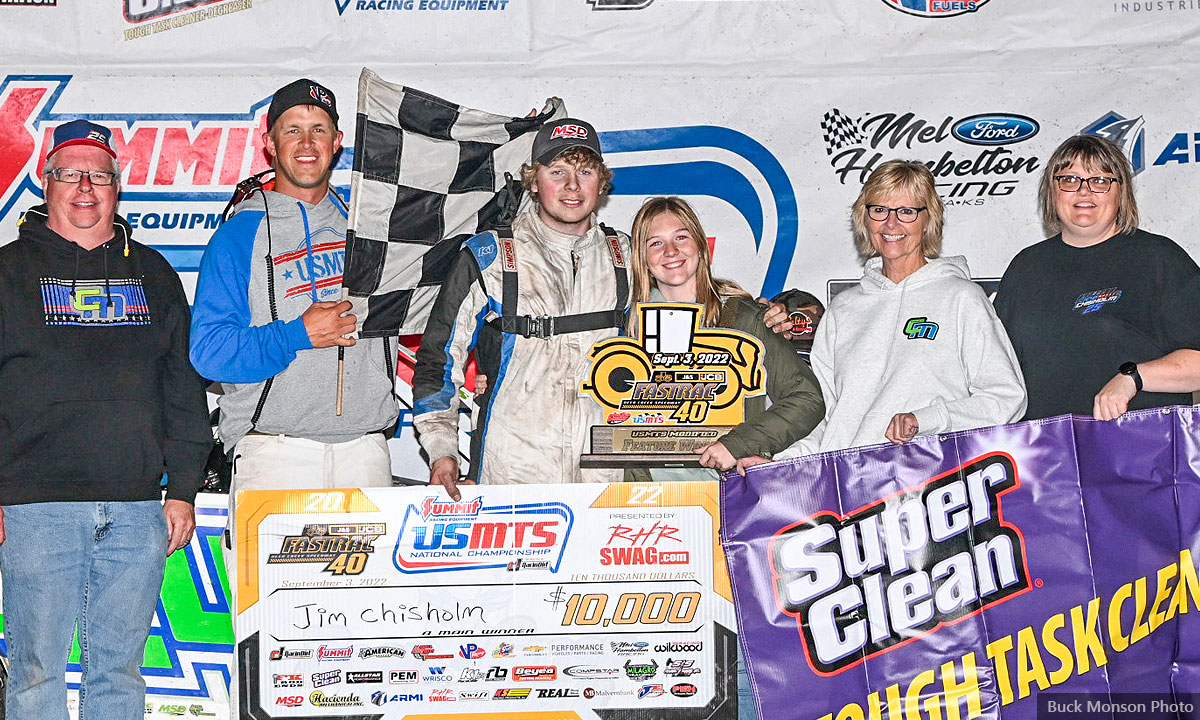 Deer Creek Speedway is one of the few places where fans feel let down when they witness just a plain good race because the norm has become a field of bloody noses in a cage match on the high-banked 3/8-mile clay oval in the rolling hills of Spring Valley, Minn.

Such was the case once again Saturday night as the Summit USMTS National Championship campaign invaded ‘The Creek’ for the 17th Annual J&S JCB Fastrac 40—and left every jaw on the floor for every pair of eyeballs fortunate enough to see it for themselves whether in person or on RacinDirt.tv.

With the competition narrowing the points gap behind leader Dustin Sorensen of Rochester, Minn., a stop at his hometown track where he has won several times before was just what the doctor ordered.

The stage was set with the second-generation racer starting the 42-lap feature from the fourth position, but one spot ahead for the drop of the green flag was Jim Chisholm—and he finished one spot ahead when the pair crossed door-to-door beneath the checkered flags about 20 minutes later.

Two minor cautions slowed the pace—one on lap 28 and another on lap 33—but neither played a factor as Chisholm and Sorensen raced virtually side by side the entire distance.

With three USMTS rookie racers earning the first three spots on the starting grid, Chisholm made quick work of front-row starters Parker Hale and Shane DeVolder to take the lead out of the gate.

As quickly as Chisholm took control, Sorensen moved up to take second and began to challenge the 19-year-old from Osage, Iowa, for the top spot. Sorensen got the lead from the two-time USRA B-Mod national champ on the ninth lap, but Chisholm came right back to reach the flagstand first two laps later.

Sorensen, 21, regained the lead with 14 circuits in the books and led through lap 20 when Chisholm fired back again to lead at the halfway mark.

Meanwhile, back-to-back event winner Jake O’Neil was running third and could smell the exhaust from behind the lead duo. Sorensen led again on lap 23 and looked to have a solid line around the racing surface, but Chisholm bounded back again and was the leader at lap 35 as he, Sorensen and O’Neil were three-wide entering the first corner.

Despite Sorensen’s high-flying efforts along the outside wall of the track, Chisholm held on to garner $10,000 and his second USMTS victory of the year while Sorensen padded his points lead with a runner-up paycheck.

The margin of victory at the finish line was just 0.122 second and, rightfully so, each led for 21 laps during the 42-lap race which saw seven lead changes between them.

Less than 24 hours after his win at the Mississippi Thunder Speedway, O’Neil recorded a solid third-place finish from his 11th starting spot while Jacob Bleess got a much-needed top-five and held off Rodney Sanders for fourth.

Sorensen’s runner-up finish gave him a little more breathing room over Mullens, who now sits 68 markers out of first place in the battle to become the 2022 Summit USMTS National Champion. 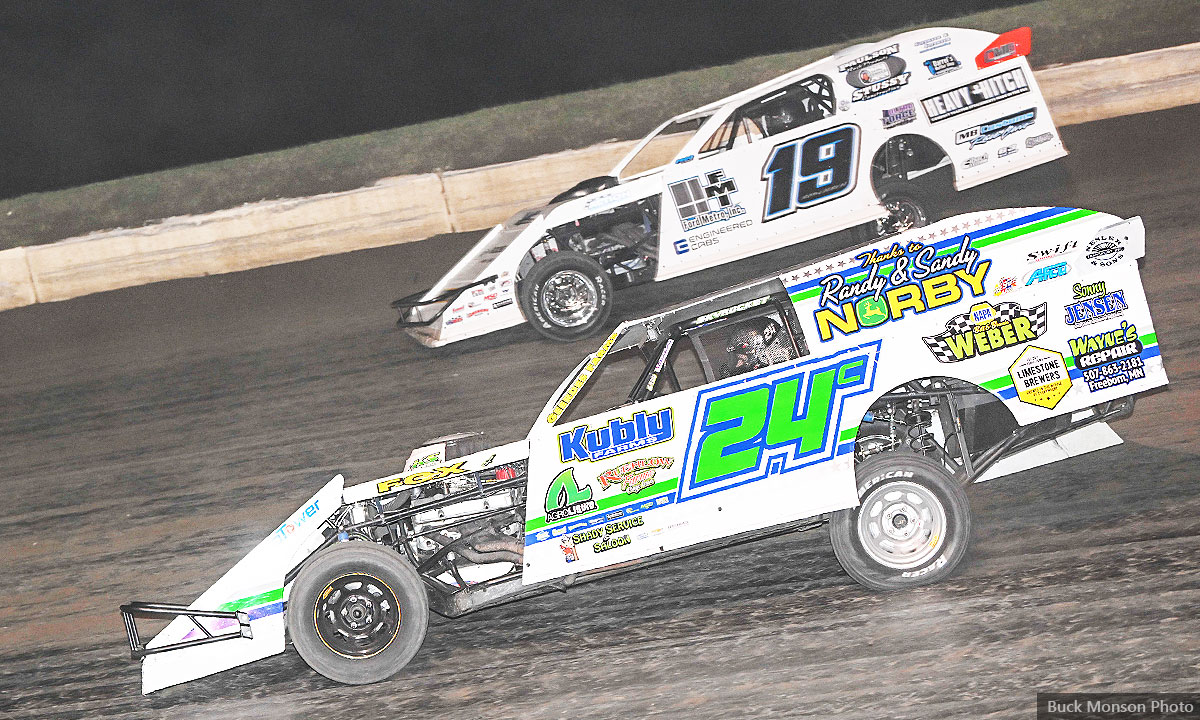 After finishing 11th and 12th in Saturday’s main event, Terry Phillips and Dereck Ramirez remain third and fourth in the standings, but took a hit in their hopes to claim the title with just seven races remaining.

Sanders sits fifth in points and VanderBeek is sixth. Assuming Sorensen attends all seven of the final shows, they are the last competitors mathematically alive to win the crown and Leon Ramirez Memorial Trophy which carries a $100,000 check with it.

Ebert, Jason Hughes, O'Neil and Fuqua fill out the rest of the top 10 spots in the Summit USMTS National Championship presented by RacinDirt.

The series returns to the Deer Creek Speedway for the 24th Annual USMTS Featherlite Fall Jamboree on Thursday, Friday and Saturday, Sept. 22-24.

The first War in West Union was waged Sept. 16, 2008, with Jake Neal garnering his first and last USMTS triumph. Ryan Gustin won in 2009 but the series didn’t return until 2016 with Zack VanderBeek coming out on top.

The pits will open at 3 p.m. with grandstands open at 4. Qualifying kicks off at 5:30 with the first green flag at 6.

If you can’t be there in person, witness all the action from anywhere on any device with RacinDirt. Watch live and get exclusive content on your desktop, laptop tablet or a suite of apps like Roku, Amazon Fire, iOS, Apple TVGoogle Play.

Well known and respected auto racing promoter Kevin Rogers has taken on a new challenge for 2023, accepting the position of General Manager at the famed Ark-La-Tex Speedway in Vivian, L…

The Best of the Best are preparing for the 24th Annual Featherlite Fall Jamboree which launches Thursday, Sept. 22, and continues through the finale on Saturday, Sept. 24. The Summit…

The Summit USMTS National Championship presented by RacinDirt comes to battle at the Fayette County Speedway for the 10th Annual USMTS War in West Union on Sunday, Sept. 4.

Inaugural USMTS King of The Ring