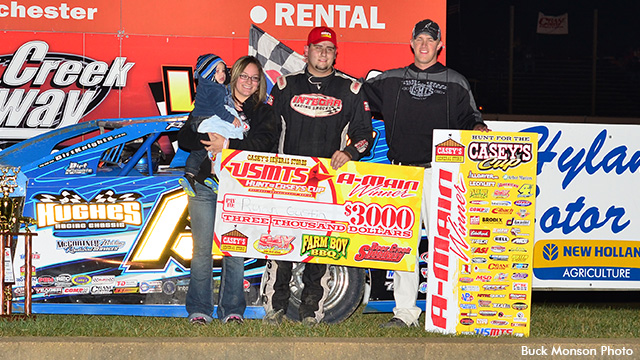 SPRING VALLEY, Minn. -- Hollywood could not have scripted a better finish in the opening feature at the 15th Annual Featherlite Fall Jamboree Friday night, or a more thrilling finish to the Hunt for the USMTS Casey’s Cup.

After a 24-hour delay for rain and time constraints on Thursday night at the Deer Creek Speedway, the season-long battle to become the next USMTS National Champion came down to three drivers slugging it out down to the last corner of the last lap of the last race.

In a 40-lap main event that had more action from front to back than one person’s pair of eyeballs could possibly follow all at once, it was Ryan Gustin getting the win after holding off Rodney Sanders in a side-by-side battle from start to finish.

While Gustin came into the final points race in the Hunt for the USMTS Casey’s Cup already eliminated from the title hunt, he did the next best thing by winning a main event at the Featherlite Fall Jamboree for the first time in his career.

Following the race, ‘The Reaper’ celebrated his feature win as he passed the torch to ‘The Rocket.’

“First off, I have to thank Rodney Sanders. That’s the cleanest anybody could ever drive you, that’s for sure,” Gustin said. “Congratulations to Rodney on his first championship. It’s well deserved.”

Gustin led all but two laps as Sanders was able to sneak underneath to lead laps 19-20. It was the 68th career win for the 22-year-old from Marshalltown, Iowa, and put $3,000 in his pocket.

Coming into the race sitting third in the points standings, Sanders started third in the 40-lapper while points leader Johnny Scott started tenth and second-ranked Jason Hughes began his quest from the 29th spot in the last row of the 30-car field.

As fans kept one eye on the battle for the lead, the other eye went back and forth from watching Scott move forward and Hughes charging through the field.

Two early-race cautions gave an assist to Hughes as he found himself running 19th with just two laps in the books. He was up to 14th by lap seven and ten lap later was already up to sixth and following Scott around the high-banked 3/8-mile dirt oval.

The 2010 USMTS National Champion was fifth by the time they reached the halfway point in the race, but Hughes was never able to advance further during the last half of the race.

One final yellow flag with six laps to go helped Jeremy Payne roar around the outside of Sanders to grab the runner-up position while Hughes and Scott shadowed Sanders around the low and middle lanes of the racing surface.

Sanders, however, was flawless over the final five circuits, getting back around Payne with four laps to go to finish second and clinch the title while teammate Jason Krohn maneuvered to a third-place finish with a last-lap pass of Payne. Hughes finished fifth and Scott was sixth to close out the closest championship battle in the 15-year history of the United States Modified Touring Series. 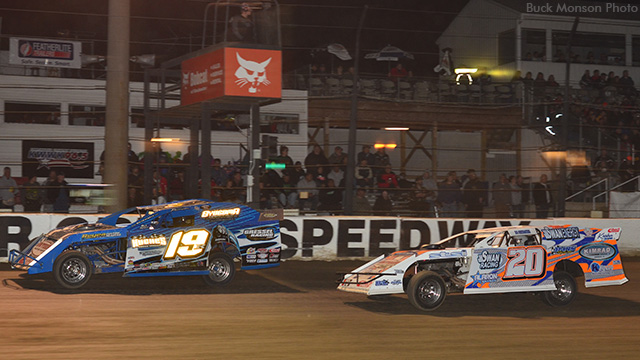 Matt Dotson claimed the seventh spot, Mike Sorensen was eighth, Kelly Shryock raced from 27th on the grid to finish ninth and Steve Whiteaker Jr. was the tenth driver to cross the finish line.

Entering the final race trailing Scott by eight points, Sanders emerged with a seven-point cushion over his fellow 23-year-old. Hughes wound up third in the final rankings, just four markers behind Scott.

Stormy Scott’s run from 30th to 11th in the main event allowed him to fend off Payne by 16 points for fourth in the final rankings. Zack VanderBeek, Gustin, Shryock, Lucas Schott and Dereck Ramirez rounded out the final top 10 in points for the 2013 campaign.

With the one-day-delayed Thursday program in the books, drivers and fans got ready for yet another full program of racing following the checkered flag. Saturday's explosive finale will feature the hottest dirt modified pilots in the nation battling for one of 30 spots in the main event that will take the green flag three cars wide and ten rows deep. Drivers will battle for a $6,000 top prize and at least $900 just to take the green flag.

And if that isn’t enough, drivers failing to make Saturday’s finale will have a chance at one of 30 spots in the annual Non-Qualifiers Race which carries a $2,000 top prize and pays $400 to start.

The annual Bean Bag Tournament begins earlier in the day at noon. Breakfast will be served by the Bear Creek Lutheran Church in the hospitality area from 8-11 a.m. on Friday and Saturday.

The Deer Creek Speedway is a high-banked 3/8-mile clay oval which sits on 60 acres with one of America’s most popular state-of-the-art racing complexes and an adjoining campground. For more information visit www.deercreekspeedway.com online or call 877-DCS-RACE. 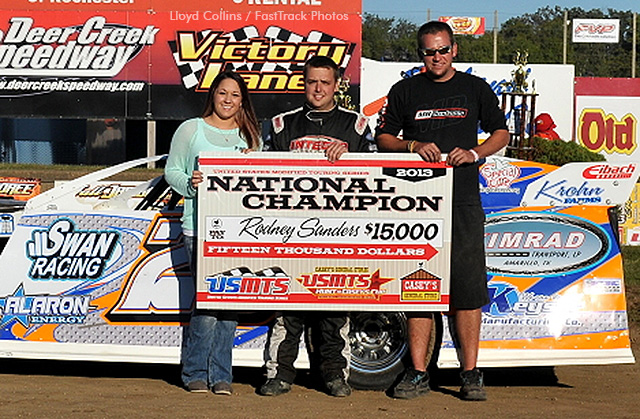 (R) = Rookie of the Year contender.