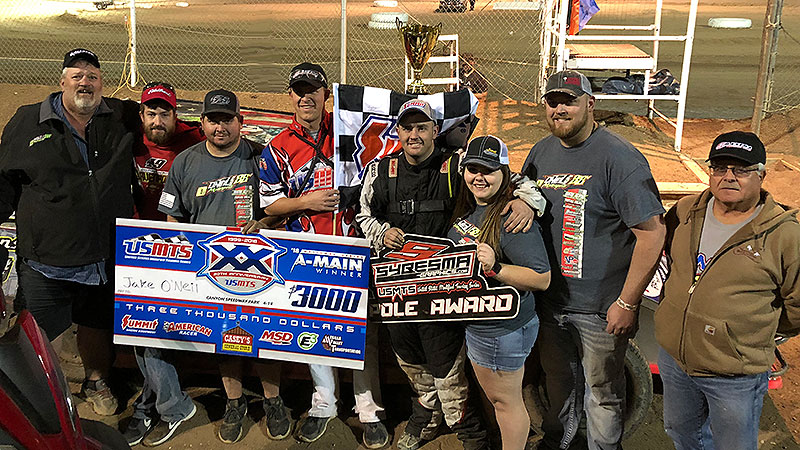 Racing against the best of the best, Jake O’Neil was one of the best with a third-place finish on Friday, but Saturday night there was nobody better from start to finish as he dominated the 40-lap USMTS Hunt for the Casey’s Cup main event at the Canyon Speedway Park.

“We haven’t run a lot of USMTS races, but we feel like we’ve been pretty good at times,” O’Neil said in victory lane after claiming the first USMTS victory of his career. “It feels pretty good to get one and to do it here in Arizona.”

Leading from the drop of the green flag to checkers, O’Neil wasn’t just dominant in the feature race. He ran down Friday’s night’s winner, Johnny Scott, to win Fast Shafts Heat Race #2 and sat atop the heat race passing points going into the night cap.

The 25-year-old from Tucson proceeded to draw the pole position and then marched away from the field to claim the $3,000 first-place money by pounding his #0 machine on the high side of the 3/8-mile clay oval.

“I felt consistent enough to be able to run that top. I just kind of feel bad for my equipment, it got kind of abused. That was pretty tough.”

Two cautions in the first eight laps allowed the field to close back in on O’Neil, and then a third and final caution just past the halfway point wiped out a sizeable lead again.

But O’Neil was up to the challenge each time and drove away from eventual runner-up Ricky Thornton Jr. on each restart. In the series’ first venture into the Copper State, the pair rewarded their fans with an Arizona pilot one-two finish.

While O’Neil was checked out, the battles for position behind him were stellar. Scott followed Thornton to the stripe in third while Lucas Schott came from 13th on the grid to take fourth in front of 11th-starting Terry Phillips.

The mud-slinging masters of dirt modified racing return to the Southern New Mexico Speedway this Friday, Saturday and Sunday, April 20-22, for the Rancho Milagro Short Track Shootout. This will be the one and only stop of the 2018 campaign at the Las Cruces, N.M., oval—and possibly the last ever before the new Vado Speedway Park opens in the near future.

Presented by Premier Waste Services, Barnett Harley-Davidson, G3 Fitness, S&S Fishing & Rental and Torco Race Fuels, fans will see the best of the best of both worlds as the blockbuster is both a USMTS Hunt for the Casey’s Cup national series race and a Summit USMTS Southern Series event.

Louisiana’s Cade Dillard has yet to win a USMTS main event this year, but he sits atop the national standings and is just two points behind Las Cruces native Johnny Scott in the southern points battle.

In the Summit USMTS Southern Series, USMTS rookie Ethan Dotson of Bakersfield, Calif., picked up his career-first win in February, and trails Johnny Scott and Dillard in the points chase entering the Short Track Shootout while two-time USMTS national champ Rodney Sanders and Ramirez rounded out the south’s top five.

While the USMTS is the pinnacle of the dirt modified world, the Southern New Mexico Speedway has no equal when it comes to local and regional talent capable of stealing the big money.

The Modifieds will be co-sanctioned by the USRA and will earn Summit USRA Weekly Racing Series national, regional and track points all three nights along with Stock Cars and B-Mods (X-Mods).

An open practice is slated for Thursday, April 19, with gates opening at 5 p.m. and practice from 6-10 p.m. Pit passes are $25 (grandstands will be closed).

The Southern New Mexico Speedway is a high-banked 3/8-mile clay oval located 11 miles west of Las Cruces at the Southern New Mexico State Fairgrounds. Take exit 132, go left and take the frontage road south of I-10 heading west. For more information, call (575) 524-7913 or (505) 524-7913 or visit www.snmspeedway.com online. You can also check them out on Facebook at www.facebook.com/southernnewmexicospeedway and follow on Twitter at www.twitter.com/snmspeedway.

After discussions between track and series officials, it was decided to postpone the Summit USMTS National Championship fueled by Casey’s portion of the Memorial Day racing progra…

Due to excessive rainfall and more expected thorughout the day and night, track and series officials have reluctantly canceled Saturday's event at the Mississippi Thunder Speedway. …

What seemed like a lifetime was a long and quiet 76 days since the Summit USMTS National Championship fueled by Casey’s last circled one of America’s racetracks, but racers …

In July of 2019, Dirt Draft entered the world of fantasy sports as the first of its kind covering grassroots short track racing events of all types. Since then, Dirt Draft has surpassed…

America is back, and so is great American dirt track racing. Celebrate your freedom with your family at Wednesday Night Madness featuring the fire-breathing Outlaw Modifieds of the Summit USMTS National Championship fueled by Casey's plus the Christie Door Company Iron Man Challenge featuring American Racer USRA Stock Cars. This is roaring, fender-slamming fun for the whole family with non-s

An Important Message from Royal Jones