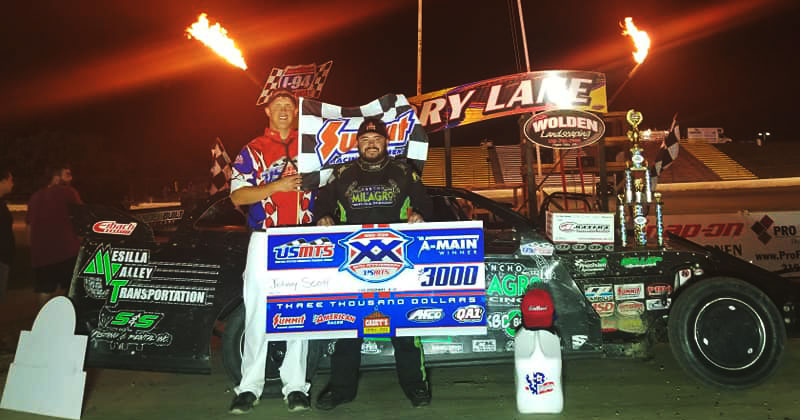 Johnny Scott doesn’t show any signs of slowing down.

A steady diet of top-five finishes propelled Scott to the top of the USMTS Hunt for the Casey’s Cup standings prior to the summer break, but six victories in his last thirteen starts—including a wire-to-wire win in Friday’s feature at the I-94 Speedway—has put the 28-year-old New Mexico native in prime position to collect his first USMTS national title.

In Friday night’s 40-lap nightcap at the Fergus Falls, Minn., speedplant, Scott got the jump on polesitter Dan Ebert to start the race and then survived four cautions and pressure from Ebert to score a $3,425 payday.

While the top two remained that way the entire distance, many others in the 24-car starting field did not.

Brady Gerdes made the most of his Real Racing Wheels “B” Main win by charging from 14th on the grid to a third-place finish beneath USMTS starter Ryne Staley’s double checkered flags.

Lucas Schott started and finished fourth and Rodney Sanders slipped from third to finish fifth, but Stormy Scott followed Gerdes through the pack to place sixth after rolling off from the 16th starting spot.

The win was Johnny Scott’s first in five tries at the I-94 Speedway, but his series-best ninth overall triumph this season and 39th of his career. Two of his wins during the 2018 campaign came in the Summit USMTS Southern Series season opener back in February where he is also the points leader with just the inaugural Summit Southern Nationals in November to decide that title.

With a record $50,000 to win the USMTS national championship and $10,000 up for grabs to the Summit USMTS Southern Series champ, Johnny Scott is in the driver’s seat to sit at the head table during the USMTS awards banquet in January.

SATURDAY: By the time you read this, teams are already loaded up and burning the midnight diesel as the USMTS heads to the the Wagamon family’s Ogilvie Raceway in Ogilvie, Minn., for the 7th Annual Chubbs Performance Modified Madness presented by U.S. Army on Saturday night.

Gates open 4 p.m. and the first heat race takes the green flag at 6:30. WISSOTA Midwest Modifieds will also be in action and racing for $3,001 to win. WISSOTA Mod Fours round out the program.

Fans can pick up $2-off discount coupons on race day at Casey’s General Stores locations in Cambridge, Foley, Milaca, North Branch, Ogilvie, Pine City, Princeton and Zimmerman. To find the location nearest you, go to www.caseys.com.

Zack Vanderbeek and his Oreo-sponsored Modified will be making an appearance at the Casey’s located at 400 W. Hwy. 23 in Ogilvie from 11:30 a.m. to 1 p.m. on Saturday.

This will be the ninth USMTS event held here. Six different drivers won each of the first six, beginning with Ryan Ruter’s victory in 2009. Mike Steensma, Kelly Shryock and Jason Hughes also tasted USMTS glory when the track was still known as I-35 Speedway.

Two events were staged in 2016 with Rodney Sanders and Cade Dillard topping those shows. Ryan Gustin won both main events last year after an early-season rain-out in June forced double features for the August show.