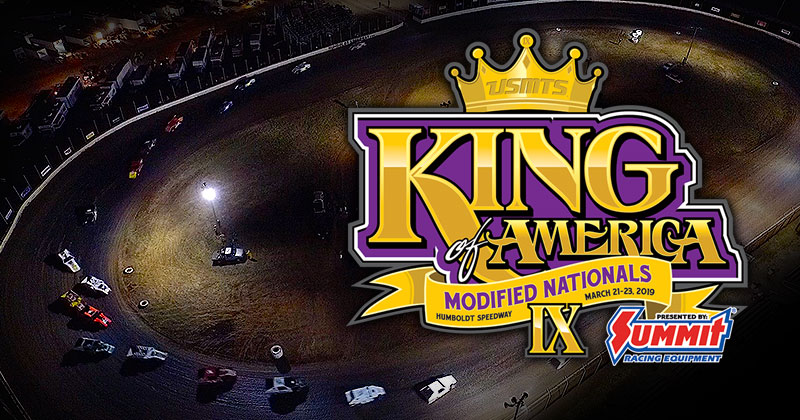 Officials from the United States Modified Touring Series have announced the dates for King of America IX presented by Summit Racing Equipment.

The ninth running of the USMTS crown jewel event is set for Thursday, Friday and Saturday, March 21-23, 2019, at the Humboldt Speedway in Humboldt, Kan., with an open practice for all drivers on Wednesday, March 20.

Seven different drivers have claimed victory in the previous eight blockbusters, including defending champion Lucas Schott of Chatfield, Minn., who captured his first crown a little more than eight months ago.

Two-time USMTS National Champion Ryan Gustin of Marshalltown, Iowa, won in 2013 and became the first repeat winner in the 2017 event. Zack VanderBeek of New Sharon, Iowa, captured the title in 2016 after a thrilling late-race battle with 2014 race winner Rodney Sanders of Happy, Texas.

Advanced ticket sales, entry forms and more detailed information about the show will be forthcoming in the next few weeks.

For those unable to attend the event in person, RacinDirt.com will be getting’ the dirt for fans with every lap of every race in every division every night broadcast live via pay-per-view.