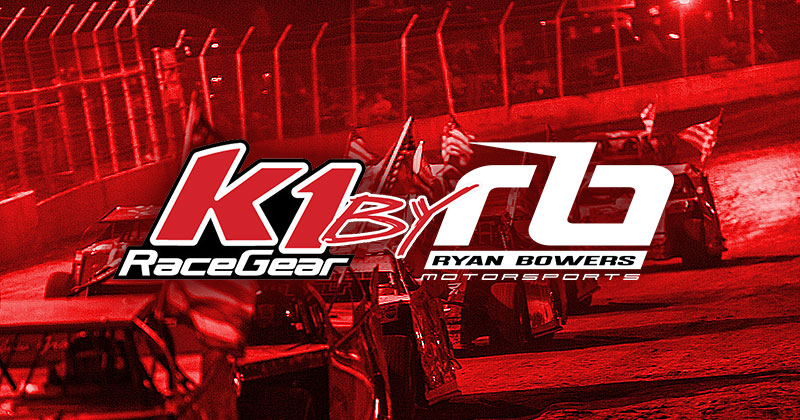 Officials from the United States Modified Touring Series are proud to announce that K1 RaceGear by Ryan Bowers Motorsports is now the Official Suit of the USMTS for the 2019 racing season.

A proud partner with Ryan Bowers Motorsports, K1 RaceGear was born in 2003 with the philosophy of offering products to their customers that they themselves would be proud to use. At K1 RaceGear, they are racers too, and understand the value of buying quality racing products at a reasonable price.

“Every one here at Ryan Bowers Motorsports and K1 RaceGear is extremely excited to be partnering with such a great series and Casey's General Store,” owner Ryan Bowers said. “USMTS has some of the best drivers competing across the country. Driver safety is very important to us and we look forward to growing a relationship with all USMTS drivers.”

K1 RaceGear by Ryan Bowers Motorsports will offer multiple contingency awards for USMTS competitors, including a $100 product certificate at every USMTS race to the top-finishing driver that fails to qualify for the main event, plus padding the year-end points fund for all racers.

At several events throughout the season, K1 RaceGear by Ryan Bowers Motorsports will have a booth at the track to display their top-of-the-line merchandise and measure drivers for proper fitting—something they will be doing for all of the Casey’s Crew competitors during this year’s Casey’s USMTS Hunt for the Championship.

“We plan to attend some marque events in 2019, stay tuned for updates on when and where,” Bowers added.

K1 RaceGear by Ryan Bowers Motorsports offers a product line constructed of SFI Manufacturer Certified materials, most of which are built with double layer DuPont Nomex III to provide maximum safety and protection. If you are looking for fire-rated racing equipment, including suits, shoes, driving gloves, or under garments, K1 Race Gear should be your first choice.

In addition to their standard range of products, K1 RaceGear by Ryan Bowers Motorsports also offers custom racing suits and gear for you or your entire team, racing helmets by renowned manufacturers such as Bell, children's products, beautiful race art for your office or home, and a good selection of sportswear brought to you by K1 Speed.

Headquartered in Columbus, Minnesota, you can learn more about everything K1 RaceGear by Ryan Bowers Motorsports has to offer by giving them a call at (612) 720-4211 or online at http://www.ryanbowers.us/k1-racegear.

The USMTS will host its annual awards banquet on Friday, February 22, at the Ameristar Casino Hotel in Kansas City. This year’s party will once again be a joint effort for both the USMTS and United States Racing Association (USRA). Fans and members of the media are invited to attend too. Call (515) 832-7944 for more information or to order tickets.

The 2019 USMTS campaign kicks off with a three-night excursion through the Lone Star State, beginning Thursday, March 14, at the 82 Speedway in Petty, Texas. Kennedale Speedway Park in Kennedale, Texas, hosts the USMTS touring titans on Friday, March 15, and the Superbowl Speedway in Greenville, Texas, wraps things up on Saturday, March 16.