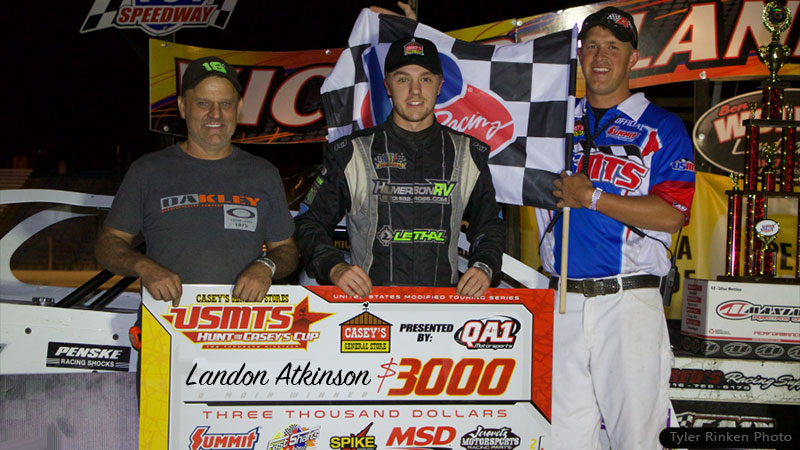 “This is something right out of a dream,” said the 22-year-old from Little Falls, Minn. “Last night I was sitting at home doing tires and I was thinking to myself ‘What if… What if I just show up, put it out there and I win the bitch?’ And I did.”

Atkinson was impressive from beginning to end. He made a last-lap pass of Zack VanderBeek to win his heat race and lead all drivers in passing points, and then redrew the pole position.

Sitting alongside Atkinson on the front row for the the start of the 40-lap main event was current USMTS national points leader Rodney Sanders who was seeking his third straight victory and 93rd of his career.

Despite the pressure, Atkinson was up to task and led every lap en route to a $2,500 payday and a place in the USMTS record books.

“There is nothing like it. These guys are the best in the country and there's a reason why they do what they do. Anytime you get a chance to run with these guys—just run with them let alone run up front—is always fun.

“I think the biggest thing is just make sure you know he's just another guy. Although it is Rodney Sanders—and he's probably one of the best modified drivers to ever do it—you can't really get too psyched out and you just gotta show up and put everything out there. If you don't win, you don't win, but sometimes you get the right end of the stick.”

It looked like a quick caution on lap 2 would be the only slowdown of the night, but when Ryan Gustin slowed and was unable to get his Spike Hardcore Energy machine completely off the racetrack, the yellow flag waved one last time with just four laps to go.

It wiped out a six-car-length lead Atkinson enjoyed over Sanders, but it was Dereck Ramirez making a bid for the top spot on the restart. Despite his best efforts, Ramirez came up short and had to settle for the second-place ribbon for the fourth straight event.

VanderBeek also slipped past Sanders in the closing laps while Blake Jegtvig charged from 15th on the grid to finish fifth and earned the FK Rod Ends Hard Charger Award.

On Saturday, the series heads to the Wagamon family’s Ogilvie Raceway in Ogilvie, Minn., where incredible action is always the norm when the Best of the Best visit the mega-popular 3/8-mile high-banked dirt oval for the 8th Annual Modified Madness presented by RacingJunk.com.

Gates open 4 p.m. with hot laps at 6:15. The first heat race takes the green flag at 6:30. Wissota Super Stocks, Midwest Modifieds and Hornets will round out the program.

Fans can pick up $2-off discount coupons on race day at Casey’s General Stores locations in Cambridge, Foley, Milaca, North Branch, Ogilvie, Pine City, Princeton and Zimmerman. To find the location nearest you, go to caseys.com.

Hunter Marriott and his Snickers-sponsored USMTS Modified will be making an appearance at the Casey’s located at 400 W. Hwy. 23 in Ogilvie from 11 a.m. to 1 p.m. on Saturday.

Back for a second straight season, Bryke Racing will be a contingency sponsor for USMTS competitors as well as a points fund contributor for the Summit USMTS National Championship fuele…