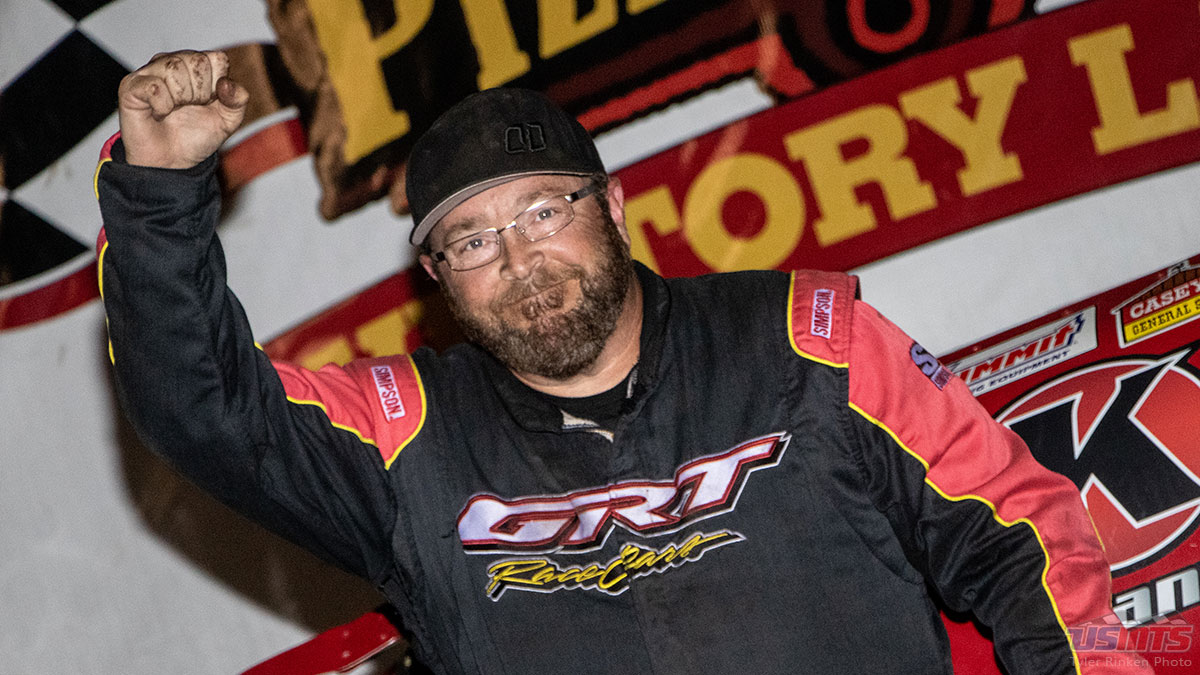 With less than eight laps to go in the main event Friday night at the Rapid Speedway, an unusual turn of events paved the way for Terry Phillips to collect his fourth Casey’s General Stores USMTS National Championship victory of the 2019 campaign.

From the outside of the front row, Ryan Gustin took charge at the drop of the green flag. A two-time winner of the USMTS Rapid Rumble presented by Wrisco, ‘The Reaper’ set a torrid pace for the first half of the race while Phillips pressured him the whole way.

The only other driver with two career wins at the 3/8-mile clay oval in the Northwest corner of Iowa, Rodney Sanders raced by Phillips just shy of halfway in the 40-lapper, and disposed of Gustin on the 22nd lap.

The race’s second caution occurred with 30 laps complete when Jake O’Neil, who was running fourth and looking to back up his win on Thursday night in Webster City, spun into the infield at the exit of turn four.

The yellow flag slowed the pace and wiped out a sizeable advantage for Sanders, but Gustin had been reeling in ‘The Rocket’ since finding new life tip-toeing around the high side of the turns.

When the green flag returned, Phillips tried to stay with Sanders on the low side while Gustin made a bold challenge around the top. One lap later, Sanders and Gustin were door to door racing down the back-stretch when the exit of turn four swallowed its next victims.

Gunning to regain the lead he lost ten lap earlier, Gustin drove hard into the third turn and slipped over the banking in turn four. Meanwhile, as he tried to settle himself and power back onto the racing surface, Sanders spun into the infield in the same spot O’Neil had two laps earlier.

As the lead duo performed synchronized spinning, the center of the racetrack parted like the red sea and Phiillips’ familiar red No. 75 came shooting out of the cloud of dust as he became the new leader.

Gustin regained control but Sanders stopped on the front-stretch to bring about the final yellow flag of the contest.

Phillips—a second-generation veteran racer nearly twice the age of Gustin and Sanders—nailed a flawless restart and was able to keep Gustin behind him until he streaked beneath the checkered flag with his 29th career USMTS triumph and a $3,000 paycheck for his efforts.

Hometown favorite Don Gerritsen Jr. raced from tenth on the starting grid and collected a career-best fourth-place finish with the nation’s elite modified tour and Hunter Marriott rounded out the top five after starting 12th.

Lance Mari also recorded a career-best sixth-place finish and USMTS legend Jon Tesch—winner of the 2007 event here—drove a second car out of the Ramirez Motorsports stable to seventh, garnering both the Eibach Spring Forward Award and FK Rod Ends Hard Charger Award in the process after rolling off 18th.

Adam Kates was eighth at the finish line while Sanders regrouped and salvaged a ninth-place finish. Polesitter Travis Saurer completed the top ten.

Nobles Next: The USMTS ventures to the Nobles County Speedway in Worthington, Minn., on Saturday for the 9th Annual USMTS Summer Slam presented by Beyea Custom Headers.

The pit gate opens at 4 p.m., grandstands open at 5, hot laps at 7 and racing gets underway 7:30. Two bikes will be given away and there will be a candy toss for the kids too.

Gustin will meet and greet fans at the Casey's General Store located at 1704 Oxford in Worthington from 11 a.m. to 1 p.m. While you’re there, get yourself a slice of delicious Casey's pizza, meet the ‘The Reaper’ and see his No. 19r Spike Hardcore Energy USMTS Modified.

Fans can grab coupons good for $2 off an adult ticket at Casey's locations in locations in Fulda, Windom and Worthington, plus Arnolds Park, George, Okoboji, Sibley and Spirit Lake in Iowa. For the location nearest you, visit caseys.com.

The event is also a Summit Shootout qualifier for the Stock Cars, B-Mods and Hobby Stocks with Summit USRA Weekly Racing Series national points up for grabs in all four USRA divisions.

The four-day USMTS swing wraps up Sunday at the Casino Speedway in Watertown, S.D., for the Sandy Benson Memorial and 10th Annual USMTS Summer Slam presented by Out-Pace Racing Products. The main event winner will pocket $4,000 at that show. 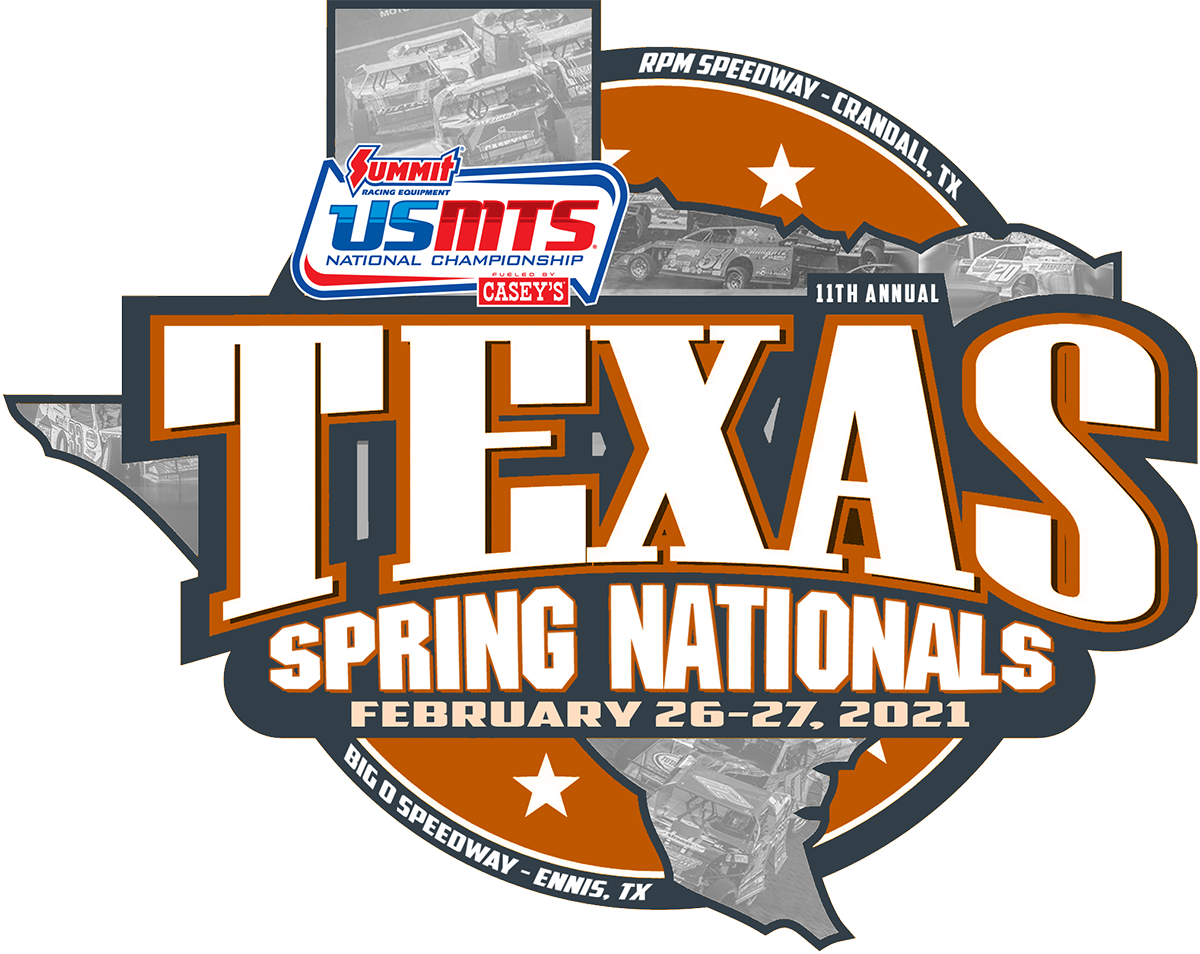