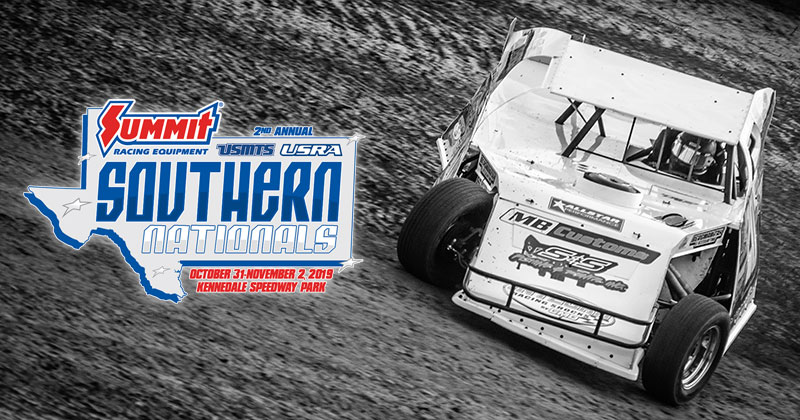 As summer begins to fade and autumn begins to slither in, the United States Modified Touring Series is readying for final points race of the season at the Summit USMTS Southern Nationals.

Set for October 30 through November 2 at the Kennedale Speedway Park in Kennedale, Texas, the event will kick off with an open practice for all competitors on Wednesday, followed by three complete blockbuster shows on Thursday, Friday and Saturday.

The tough-as-nails touring titans of the USMTS will battle for $2,000 to win Thursday and $3,000 to win Friday before capping the weekend with a $5,000-to-win finale Saturday night and the crowning of the 21st USMTS national champion.

Unless something miraculous happens, that person will be Rodney Sanders.

The 30-year-old from Happy, Texas, comes into the event with a healthy 212-point lead (3,619 to 3,407) over Dereck Ramirez of Woodward, Oklahoma. In order to capture his third USMTS title, Sanders simply needs to put his suit on all three nights.

Meanwhile, Ramirez has a big lead over third-ranked Hunter Marriott of Brookfield, Missouri (3,188) and Terry Phillips of Springfield, Missouri (3,021) while another former champ, Ryan Gustin of Marshalltown, Iowa, is fifth with 2,953 points.

With the points titles for the Mid-American Series, Northern Lights Series and Hunt for the Casey’s Cup already sewn up, Sanders can also make it a sweep of the regional action this year by holding on to his lead in the Summit Southern Series.

Not only will fans witness the biggest names in dirt modified racing during the Summit Southern Nationals, but the best of the best in the Factory Stock and Limited Mod divisions will also be battling for $1,000 to win Thursday, $1,500 on Friday night and a top prize of $2,000 on Saturday in both classes.

On top of that, any driver that wins all three features in either division gets a $1,000 bonus or win two of three and get a $500 bonus.

Wednesday’s practice will get underway at 6 p.m. and go until 8:30. The pits will open at 2 and the drivers meeting will commence at 5:30. Pit passes will be $20 and admission to the grandstands is free. This will likely be the only night for hot laps.

More information for racers is available in the Downloads section of usmts.com and usraracing.com.

Dozens of racers took part in an open practice test ‘n’ tune session Thursday night at the I-37 Speedway in Pleasanton, Texas, in anticipation of Friday’s inaugural &l…

With the beginning of a new decade, it’s only fitting that the 2020 campaign for the Summit USMTS National Championship fueled by Casey’s will invade the I-37 Speedway in Pl…

The ultimate tire machine, Tire Demon allows for easy tire grinding, siping and needling all with one machine and the company is back again as a supporter of racers in the Summit USMTS …

Miller Electric Mfg. LLC, a leading worldwide manufacturer of Miller® brand arc welding equipment, is on board to be the new title sponsor of the USMTS Manufacturer of the Year Awar…

The Summit USMTS National Championship fueled by Casey's blasts off with three nights of racing in Texas, and it all begins Friday, February 28, at the I-37 Speedway in Pleasanton. The titanic USMTS touring titans roll two hours south on Saturday, February 29, as they return to the South Texas Speedway in Corpus Christi before wrapping up the season-opening tripleheader on Sunday, March 1, at the