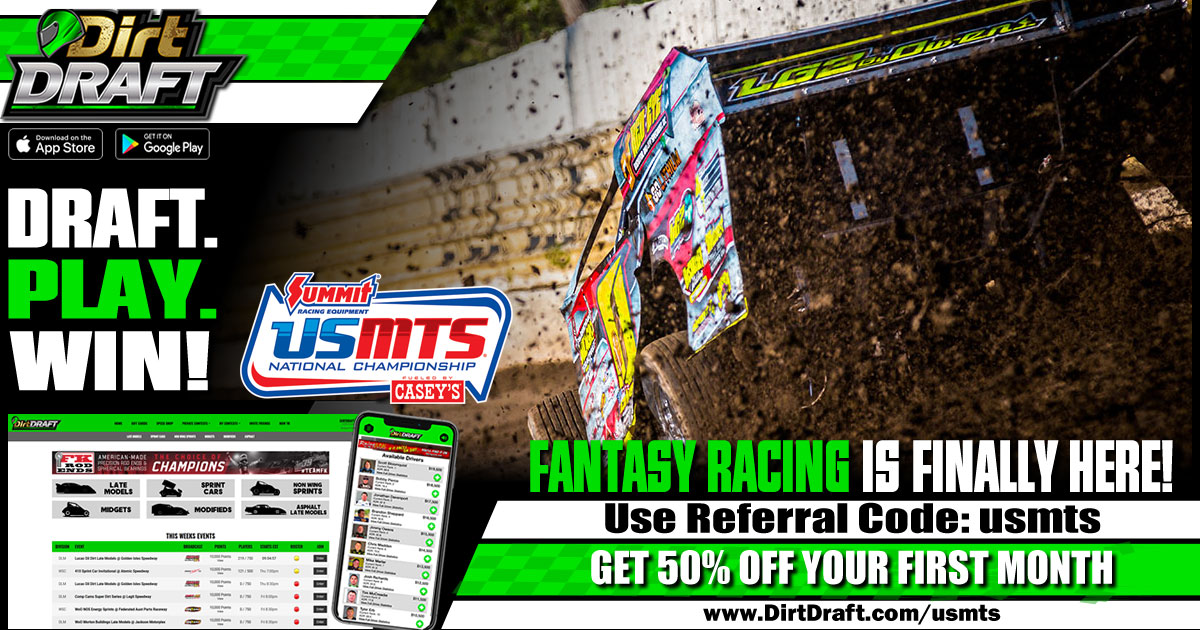 In July of 2019, Dirt Draft entered the world of fantasy sports as the first of its kind covering grassroots short track racing events of all types. Since then, Dirt Draft has surpassed initial expectations and has grown strong enough to host more than 400 individual events this year.

Over the next three years, Dirt Draft will provide fantasy contests for over 150 events for the Summit USMTS National Championship fueled by Casey’s. Each event awards users points based on their fantasy teams results that they can then redeem in the Dirt Draft Speed Shop for event tickets, live broadcasts, subscriptions, merchandise and much more.

Representatives from Dirt Draft and the United States Modified Touring Series have come to an agreement that positions Dirt Draft to become the Official Fantasy Sports Provider of the USMTS through the end of the 2022 season.

Both are excited to spend the next three years working closely together to enhance the experience for both the Dirt Draft user and dirt modified fans.

“This is an exciting time not just us at Dirt Draft but the entire USMTS community,” said Clint Doll of Dirt Draft. “The fan base is as devoted and passionate about their racing as any.  We know that they will enjoy being able to play Dirt Draft, draft their team for each event and compete against thousands of other fans in our public or private leagues to prove their knowledge of USMTS racing.

“In addition, users will be able to redeem earned points for tickets to USMTS events, subscriptions to live broadcasts, official USMTS merchandise and other surprises along the way.

The USMTS is the most popular open-wheel dirt modified series in the world and more than 4,600 different drivers from 36 states have competed at over 180 different dirt tracks spanning America.

Currently, the 2020 schedule for the Summit USMTS National Championship fueled by Casey’s is highlighted by 43 nights of racing at 28 unique dirt ovals for the 22nd season of competition featuring the world’s Best of the Best in dirt modified racing.

“Dirt Draft has developed a great product that we know our fans and racers will really enjoy,” said USMTS Chief Communications Officer Jeff Nun. “This will be a great addition to the suite of products out there that enhance the USMTS experience and allow dirt modified enthusiasts a path to fun and competitive interaction.”

The USMTS will also provide an arrangement of products that will be available in the Dirt Draft Speed Shop that can be redeemed with users’ Dirt Draft points. These items will include such items as USMTS branded merchandise, event tickets, live broadcasts and much more.

Further news and information pertaining to the newly-formed partnership is coming soon from Dirt Draft and the USMTS. In the meantime, visit DirtDraft.com/USMTS and enter referral code “USMTS” when signing up to get your first month on Dirt Draft for just $2.99.

What is Dirt Draft?
Dirt Draft is the first grassroots racing fantasy sports website/app. On Dirt Draft, users pay a subscription of $5.99/month or $59.99/year to play unlimited contests from over 400 race events annually. Each contest is a salary draft in which a user has a $100,000 salary cap and must choose 5 drivers while staying under that salary cap to create their best team of 5. Each driver has a unique salary assigned to them dependent on their current ADR (average driver rating). This salary will increase/decrease each event based on data sent to Dirt Draft’s software evaluating their most recent performances. The user then enters a public contest to compete against hundreds of others, or a private contest to compete against their friends. The goal is that the user drafts a team that scores more points than all other users in which they are competing against. Based on a user’s performance in a contest, they are awarded points in which they can redeem in the Dirt Draft Speed Shop for event tickets, event broadcasts, merchandise, subscriptions, etc.

For more information regarding Dirt Draft, visit our website at DirtDraft.com. Also, be sure to follow along on social media for the latest news and updates via @DirtDraft on Twitter and on Fadcebook at facebook.com/DirtDraftFantasyRacing.