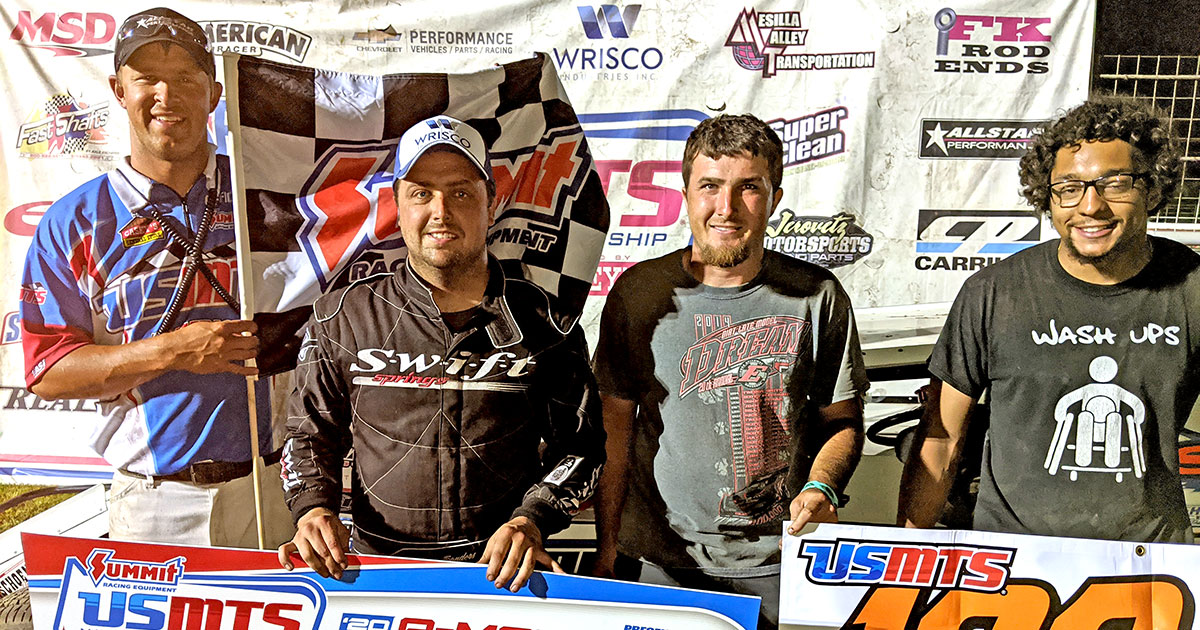 From pandemics to rain-outs and some mechanical misfortune too, Rodney Sanders was beginning to wonder if he’d ever hit the 100-win milestone in the Summit USMTS National Championship fueled by Casey’s.

The 30-year-old three-time USMTS national champ can put those worries to bed following a decisive wire-to-wire victory Saturday in the 7th Annual USMTS Juggernaut presented by Drive4JRT.com at the Tri-State Speedway in Pocola, Okla.

“It seemed like we were never going to get this one,” Sanders said as he and his crew celebrated win No. 100. “We've had good opportunities the last few nights with good draws and, man, I just totally screwed the car up.

“This is something that's kind of hard to put into perspective. There's only a few guys that's done that so that's pretty cool and now we're just gonna keep going.”

Sanders is just the fourth racer in USMTS history to light up the third digit in career win totals. The Happy, Texas, resident is just three wins behind Ryan Gustin who garnered his 100th last August and added two more wins the last two nights.

Kelly Shryock is the all-time leader with 182 triumphs and Jason Hughes, who finished seventh Friday night, has 155 to his credit including three here at the Tri-State Speedway.

It was the first USMTS win here for Sanders who notched his first win June 26, 2009, about five hours north of here at the LA Raceway in La Monte, Mo.

Sanders drew the No. 2 pill and launched from the outside of the front row to kick off the 40-lap main event. Within a few laps, his advantage over the field was a half-straightaway.

Grant Junghans USMTS Rookie of the Year contender Brooks Strength of Raymond, Miss., climbed from fourth on the grid to second early on with Gustin searching the high side for a way around.

Gustin eventually found a faster line around Strength and secured the second position. With the leaders hampered by thick lapped traffic, he was closing on Sanders every lap when the first caution waved with 23 laps complete.

‘The Reaper’ got the break he wanted—so he thought—but later admitted that his tires “glazed over” during the slow-down period and he was never able to match the same momentum from that point on.

Jake O'Neil and Tanner Mullens both snuck past Gustin on the restart but three more yellow flags over the next seven laps slowed the action and kept the pack within striking distance of Sanders.

But on every restart, Sanders walked away from everybody, eventually crossing the finish line with more than three seconds to spare over hard-charging Terry Phillips, Mullens, O’Neil and 11th-starting Zack VanderBeek.

Gustin held off Hughes in a battle for sixth-place money, Chad Wheeler was eighth, Tyler Davis held on for ninth and ‘Big Daddy’ Joe Duvall completed the top ten.

“I was glad for the track position because I felt like in clean air I could kind of use the racetrack the way I needed to. We've been kind of struggling a little bit—we’ve been all over the place on stuff so I didn't really know what to expect. I felt like I wasn't driving straight off the corner at the end up but apparently it was good enough.”

In addition to getting the 100-win monkey off his back, the $3,000 winner’s share of the prize money was a welcome addition to his earnings.

“This has been probably one of the roughest years I've ever had but luckily I have good people that keep sticking behind me. It's not an open checkbook by no means. Everybody pitches in where they can and I'm very appreciative of what everyone does.”

Sanders will be the new points leader when the series heads to the first crown jewel of the year next weekend. Dereck Ramirez is second, followed by Hughie, Hunter Marriott and Calvin Iverson. 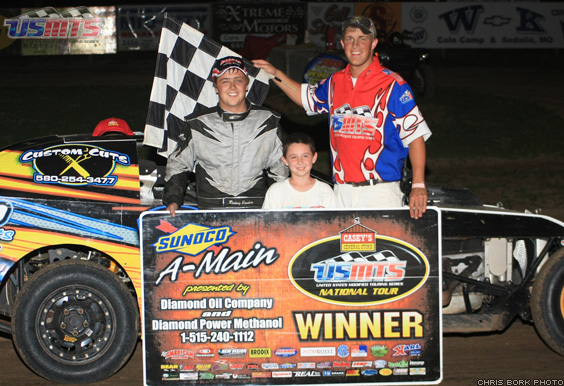 Masters on deck: The undisputed best of the best in the world of dirt racing will converge on the Cedar Lake Speedway in New Richmond, Wis., for the 21st Annual Masters next Thursday, Friday and Saturday, June 11-13.

Featuring one of the largest event purses on the series schedule, this year’s crown jewel will once again feature CLS Late Models sharing the spotlight and competing for the same big paydays as the USMTS Modifieds all three days. USRA Late Models will also run a complete program each night.

The mega-event kicks off with a pair of $3,000-to-win shows on Thursday, followed by a $5,000 top prize in each class on Friday. It all leads up to Saturday's ferocious finale which offers $10,000 to the winners of both the Super Late Model and USMTS Modified main events.

You don't want to miss a single night, but if you aren’t able to be there in person, RacinDirt.TV will broadcast every lap of every race live to your screen.

Currently, the 2020 schedule for the Summit USMTS National Championship fueled by Casey’s is highlighted by 43 nights of racing at 28 unique dirt ovals for the 22nd season of competition for the world’s Best of the Best in dirt modified racing.