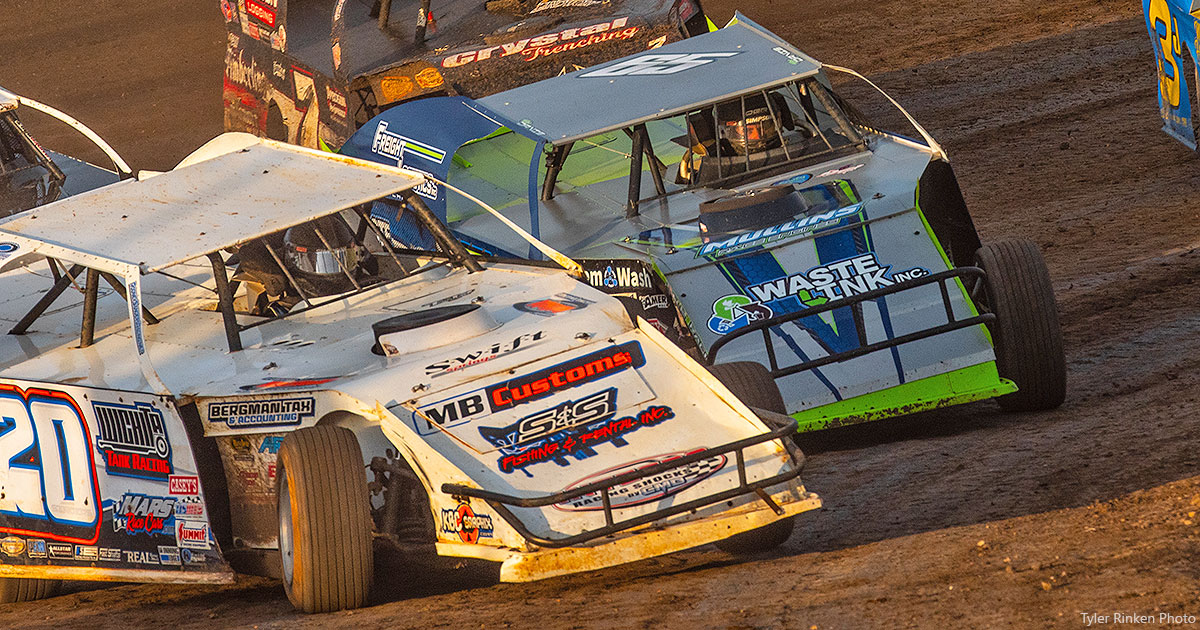 Iowa’s five-day celebration of freedom, fun and fast cars throughout the Hawkeye State is nearing the green flag with the summer’s biggest dirt track racing caravan set for Tuesday-Saturday, June 16-20.

The party starts Tuesday, June 16, when both series make their debut at the Stuart International Speedway and then continue with another show of speed on Wednesday, June 17, at the Cedar County Raceway in Tipton. Each night will see USMTS Modifieds are racing for $2,500 to win, USRA Stock Cars shooting for a $600 top prize and the USRA B-Mod main event winner getting $500. Mensink Racing Products USRA Hobby Stocks are also on the card at Stuart.

Both nights will celebrate the local racer too. The top three local racers in each class—four at Stuart, three at Tipton—will earn bonuses of $100, $75 and $50, respectively, on top of the already stellar payouts.

A few hours of sleep and the rugged road warriors are on to the Mason City Motor Speedway on Thursday, June 18, for Mayhem! in Mason City featuring the Summit USMTS National Championship fueled by Casey’s ($2,500 to win) and Christie Door Company Iron Man Challenge featuring USRA Stock Cars ($600 to win) and USRA B-Mods ($500 to win).

Friday finds the USMTS Modifieds returning to the Rapid Speedway in Rock Rapids for the 12th Annual USMTS Rapid Rumble presented by American Racer. “Rocky” was the site of one of the most thrilling shows in 2019 when both Rodney Sanders and Ryan Gustin spun while racing for the lead. That opened for door for Terry Phillips to sneak in, take the money and run.

The $3,000-to-win USMTS penultimate show will see USRA Stock Cars, USRA B-Mods and USRA Hobby Stocks also in action along with Sportsmans. Race time is 7:30 p.m. More information can be found at RockRapidsSpeedway.com.

The fifth round of action during 2020 Iowa Speedweek happens at the Hamilton County Speedway in Webster City for the 14th Annual USMTS Webster City Wrangle presented by D&B Agro-Systems with the USMTS touring titans again sparring over a $3,000 top prize.

Also on the card are USRA Stock Cars, USRA B-Mods and USRA Hobby Stocks with race time 7:30. Get more information such as driving directions and news at HamiltonCoSpeedway.com.

Launched in 2010 as a series for Stock Cars, the USRA B-Mod division was added to the Iron Man lineup in 2011. Between the two classes, 14 different champions have emerged from 19 title chases. Derek Green (USRA Stock Cars) and Dan Hovden (USRA B-Mods) are the defending Christie Door Company Iron Man Challenge national champs.

Currently, the 2020 schedule for the Summit USMTS National Championship fueled by Casey’s is highlighted by 43 nights of racing at 28 unique dirt ovals for the 22nd season of competition for the world’s Best of the Best in dirt modified racing.