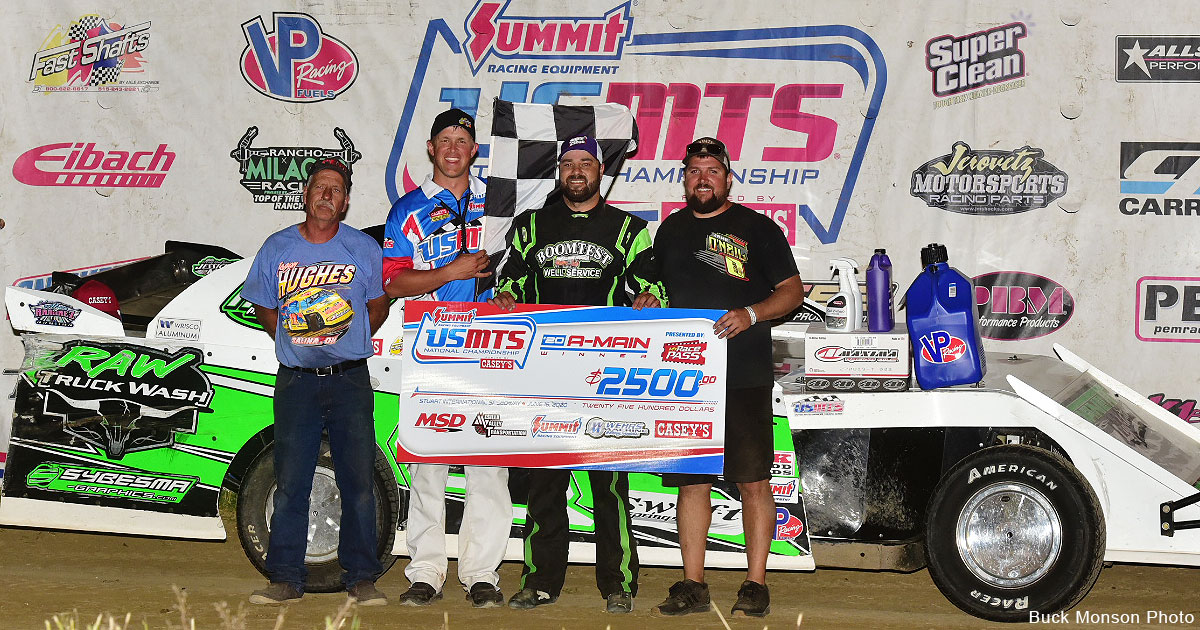 It would be a crime against dirt track racing humanity if another 21 years go by without the Summit USMTS National Championship fueled by Casey’s competing at the Stuart International Speedway.

Now in its 22nd season, Tuesday’s inaugural Smackdown in Stuart was the first visit by the USMTS touring titans to Mike Van Genderen’s ultra-competitive short track. With fierce, nail-biting action everywhere on the track during the main event, the fans—a lot of them—were the big winners.

Them, and Dereck Ramirez who claimed his first USMTS victory of the season and ninth of his storied career which moved him into the top 20 on the all-time wins list tied with Lucas Schott and Brad Waits—one tally behind Mike Chasteen.

It wasn’t easy for Ramirez, but the 33-year-old from Woodward, Okla., was up to the task, leading the final 17 circuits in the Ramirez also pocketed an additional two bonus points for leading the most lap in the Casey’s “A” Main.

Three nights after coming up two spots short of sweeping the 21st Annual Masters at the Cedar Lake Speedway in Wisconsin, Sanders was unable to take advantage of his Sybesma Graphics Pole Award and saw Grant Junghans Rookie of the Year points leader Calvin Iverson lead the first lap.

Iverson and Sanders swapped a couple of slide-jobs during the first two laps before settling in nose to tail around the high side of the Stuart high banks. As it would several times during the race, lapped traffic slowed Iverson briefly—enough for Sanders to squirt past on lap 9.

On the same lap, Jason Hughes also got by Iverson but the two made contact with Hughes spinning but Iverson getting the blame and restarting at the rear of the field following the race’s first of two cautions.

Back under green, Hughes chased Sanders around the 1/4-mile bullring as they danced dangerously close to the outer concrete wall. Following the last yellow flag on lap 12, Tanner Mullens made his way past Hughes on lap 13 and began threatening Sanders for the lead.

Maneuvering in and out of lapped traffic, Mullens was able to sneak by Sanders as they completed the 23rd lap. Seven laps later, Sanders careened off of a back-marker that was trying to knock down the wall in turn two.

Ramirez laid claim to second place and then used the uncharted middle of the racing surface to race by Mullens in front of the flagstand as they eclipsed the 34th orbit.

Mullens never lost sight of Ramirez but save for a momentary peek to the outside of a lapped car that Ramirez quickly had second thoughts about, the two remained that way to the finish line with Ramirez nabbing the $2,500 top prize and Mullens settling for the runner-up paycheck.

Just getting started: The five-day celebration of freedom, fun and fast cars throughout the Hawkeye State continues Wednesday at the Cedar County Raceway in Tipton. Headlined by the fire-breathing USMTS Modified, the Christie Door Company Iron Man Challenge featuring USRA Stock Cars and B-Mods is also on tap.

USMTS Modifieds are racing for $2,500 to win, USRA Stock Cars shooting for a $600 top prize and the USRA B-Mod main event winner getting $500. The top three local racers in each class will earn bonuses of $100, $75 and $50, respectively, on top of the already stellar payouts.

A few hours of sleep and the rugged road warriors are on to the Mason City Motor Speedway on Thursday, June 18, for Mayhem! in Mason City featuring the Summit USMTS National Championship fueled by Casey’s ($2,500 to win) and Christie Door Company Iron Man Challenge featuring USRA Stock Cars ($600 to win) and USRA B-Mods ($500 to win).

Friday finds the USMTS Modifieds returning to the Rapid Speedway in Rock Rapids for the 12th Annual USMTS Rapid Rumble presented by American Racer. “Rocky” was the site of one of the most thrilling shows in 2019 when both Rodney Sanders and Ryan Gustin spun while racing for the lead. That opened for door for Terry Phillips to sneak in, take the money and run. The $3,000-to-win USMTS penultimate show will see USRA Stock Cars, USRA B-Mods and USRA Hobby Stocks also in action along with Sportsmans. Race time is 7:30 p.m. More information can be found at RockRapidsSpeedway.com.

The fifth round of action during 2020 Iowa Speedweek happens at the Hamilton County Speedway in Webster City for the 14th Annual USMTS Webster City Wrangle presented by D&B Agro-Systems with the USMTS touring titans again sparring over a $3,000 top prize. Also on the card are USRA Stock Cars, USRA B-Mods and USRA Hobby Stocks with race time 7:30. Get more information such as driving directions and news at HamiltonCoSpeedway.com.