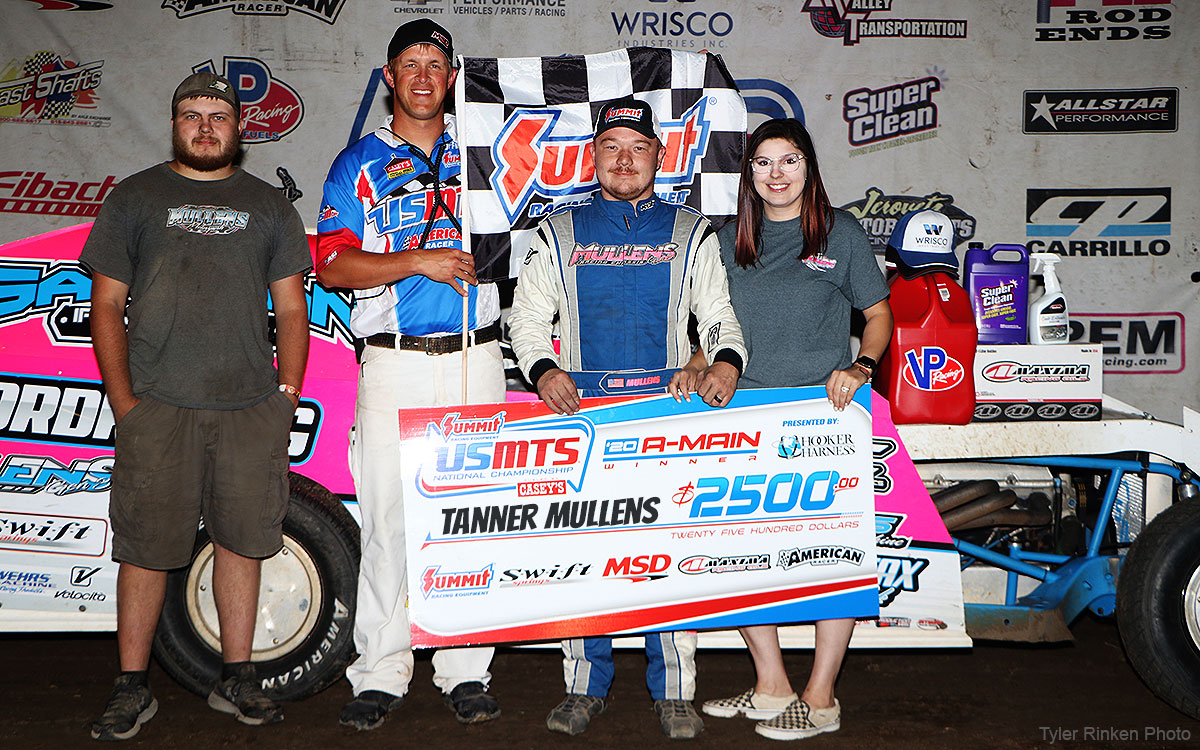 In dirt track racing, actions speak louder than pedigrees but in the case of Tanner Mullens both are sounding the alarm bell that the Summit USMTS National Championship fueled by Casey’s may have a contender to be the new sheriff in town.

On Wednesday evening, the third-generation 27-year-old from Wichita, Kansas, drew the pole for the start of the 40-lap main event and that was all she wrote.

With Zack VanderBeek breathing down his throat from beginning to end, he never waivered and cruised through the caution-free contest to his second USMTS victory of the season.

And while his name may be unfamiliar to some fans outside of his region, it is one that is synonymous with winning for three generations now.

His father, Buddy Mullens, is a heavily-decorated driver who won 10 Hutchinson Grand Nationals crowns—six of them in the Modified division—at the Kansas State Fairgrounds half-mile dirt track. His grandfather, Pinky Mullens, also claimed a Hutch Nationals title in 1992.

Tanner Mullens is a three-time winner of the Hutchinson event himself, and is now a two-time USMTS winner battling the Best of the Best in the sport of dirt modified racing.

While VanderBeek had to settle for runner-up honors Wednesday, Jason Hughes came out on top of a good racelong battle with Rodney Sanders to finish fourth. Jacob Bleess completed the top five.

Hunter Marriott was sixth and dirt late model standout Chris Simpson recorded a seventh-place finish in his first start with the USMTS.

For Mullens, it was the third time that he led the most laps in a USMTS feature this season and trails only Sanders in total laps led (157 to 109) during the campaign. In six starts he has five top-five finishes and hasn’t been outside of the top ten at the end of any race.

The Mason City Motor Speedway is a 1/3-mile clay oval located 5.1 miles east of I-35 at exit 194 on SR 122 (at the North Iowa Fairgrounds). For more information, call (515) 832-6000 or check out masoncitymotorspeedway.com online. You can also like the track’s Facebook page at facebook.com/MasonCityMotorSpeedway and follow on Twitter at twitter.com/RacinMasonCity.

The fifth round of action during 2020 Iowa Speedweek happens at the Hamilton County Speedway in Webster City for the 14th Annual USMTS Webster City Wrangle presented by D&B Agro-Systems with the USMTS touring titans again sparring over a $3,000 top prize. Also on the card are USRA Stock Cars, USRA B-Mods and USRA Hobby Stocks with race time 7:30. Get more information such as driving directions and news at HamiltonCoSpeedway.com.