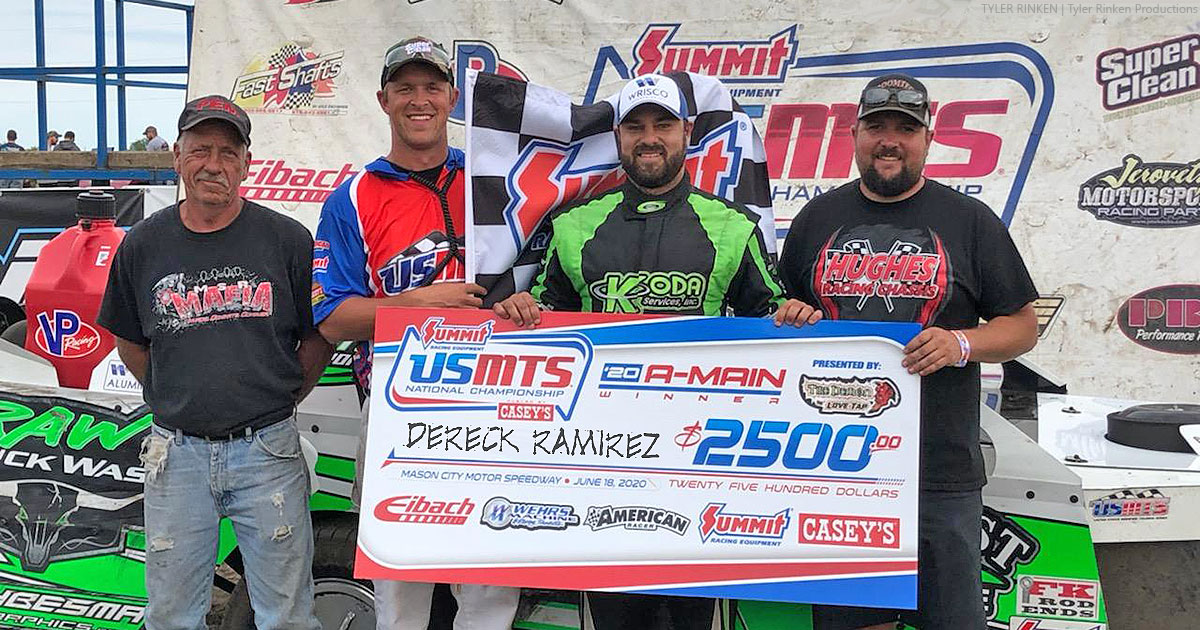 Dereck Ramirez scored the tenth victory of his career Thursday when the Summit USMTS National Championship fueled by Casey’s invaded the Mason City Motor Speedway for the tenth time since 2009.

But it was the first time for the series on the newly-configured high-banked 1/3-mile clay oval and that has seen just a handful of races since the end of the 2018 season.

Dubbed Mayhem! in Mason City, the race delivered with a fantastic battle between three or four racers contending for the lead throughout the 40-lap main event.

Jason Cummins, who won last Sunday’s USRA Modified feature here, took off from the pole and beat Jacob Bleess to the first corner. Bleess fought back but began to lose grip in turn four as he nearly spun.

The chain reaction of those slowing behind him resulted in the first and only caution of the race with one lap officially scored. At least six were involved with three of them—Bleess, Joe Duvall and Casey Skyberg—unable to return for the next green flag.

The remainder of the race was not without drama though as Cummins set a fast pace with Ramirez, Tanner Mullens and Rodney Sanders all within striking distance.

Ramirez used lapped traffic to his advantage and slipped past Cummins to lead the seventh lap. Although he never relinquished the lead after that, Ramirez saw the other three in the breakaway quartet on multiple occasions.

While Ramirez got the $2,500 top prize, Sanders was able to take advantage of Mullens’ brief delay in getting by a back-marker to steal the runner-up spot away while Cummins trailed in fourth.

The win—his second in three nights—was the first for Ramirez at the North Iowa Fairgrounds facility. Sanders won here on the big half-mile track in 2016 and Hughes was the winner when the series arrived in 2013 when it was called I-35 Speedway. The race was nearly completed without caution and may not have survived another as a downpour soaked the area just minutes after the checkered flag waved. The rained-out features for the USRA Stock Cars and USRA B-Mods will happen Sunday when the Mason City Motor Speedway hosts another round of the Summit USRA Weekly Racing Series.

“Rocky” was the site of one of the most thrilling shows in 2019 when both Rodney Sanders and Ryan Gustin spun while racing for the lead. That opened for door for Terry Phillips to sneak in, take the money and run. Fans witnessed a barn-burner two years ago when Johnny Scott limped home the final lap with a blown tire.

The fifth round of action during 2020 Iowa Speedweek happens at the Hamilton County Speedway in Webster City with the USMTS touring titans again sparring over a $3,000 top prize plus USRA Stock Cars, USRA B-Mods and USRA Hobby Stocks. Race time is 7:30. Get more information at hamiltoncospeedway.com.