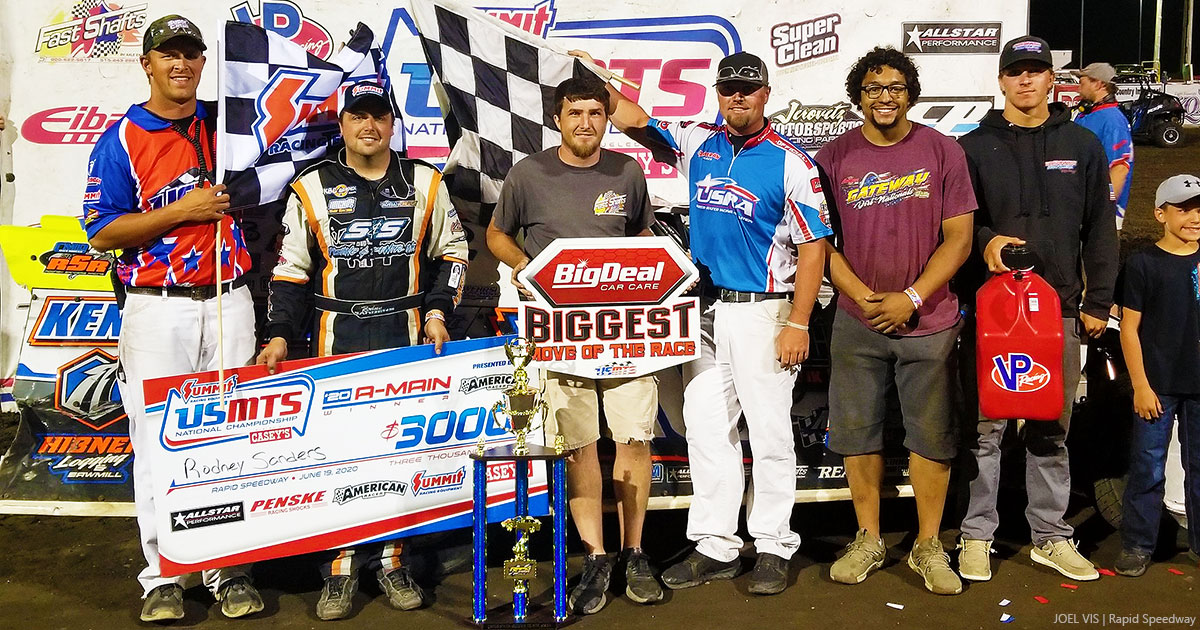 The Rocket gets redemption in Rock Rapids

Rodney Sanders registered his sixth Summit USMTS National Championship fueled by Casey’s main event win of the 2020 campaign as he raced his way into victory lane Friday at the Rapid Speedway with a late-race pass of Jason Hughes during the 12th Annual Rapid Rumble presented by American Racer.

The $3,000 effort came one week shy of the anniversary of his first win in 2009 and was the 103rd career checkered flag for the 30-year-old from Happy, Texas, which ties him for third on the all-time USMTS wins list with Ryan Gustin.

Jason Hughes led the first 30 of the 35-lap feature race before Sanders was able to blast around the four-time USMTS champion and go on to win. Second on the all-time wins list, the pass and runner-up finish denied Hughes of his 156th career win and first triumph since September 3, 2017.

Kelly Shryock continues as the winningest USMTS competitor of all time with 182 wins on his resume while capturing nine series titles. He was the winner of the inaugural Rapid Rumble in 2006.

Now a three-time winner of this event, Sanders crossed the finish line 1.14 seconds ahead of Hughes while 2017 Rapid Rumble winner Dereck Ramirez came home third in front of Hunter Marriott and Tanner Mullens.

Last year’s winner, Terry Phillips, collected a sixth-place paycheck. The Rapid Rumble was one of the most thrilling shows last season when both Sanders and Ryan Gustin spun while racing for the lead. That opened for door for Phillips to sneak in, take the money and run.

Rookie Casey Skyberg sailed to a seventh-place finish and another rookie, Tyler Davis, came from 13th on the grid to earn the eighth spot. Adam Kates nabbed ninth and Kyle Brown took down his fourth straight top-10 finish of the week.

Sanders remains the points leader and will wear the fluorescent yellow Wrisco Points Leader spoiler when the series invades the Hamilton County Speedway in Webster City, Iowa, on Saturday.

Saturday stop in Webster City: A five-day celebration of freedom, fun and fast cars criss-crossing the Hawkeye State, the fifth and final round of action during Iowa Speedweek happens at the Hamilton County Speedway in Webster City with the USMTS touring titans again sparring over a $3,000 top prize.

For more information, call (515) 832-6000 or check out HamiltonCoSpeedway.com. You can also get social on Facebook and Twitter (@HamiltonCoSpeed).