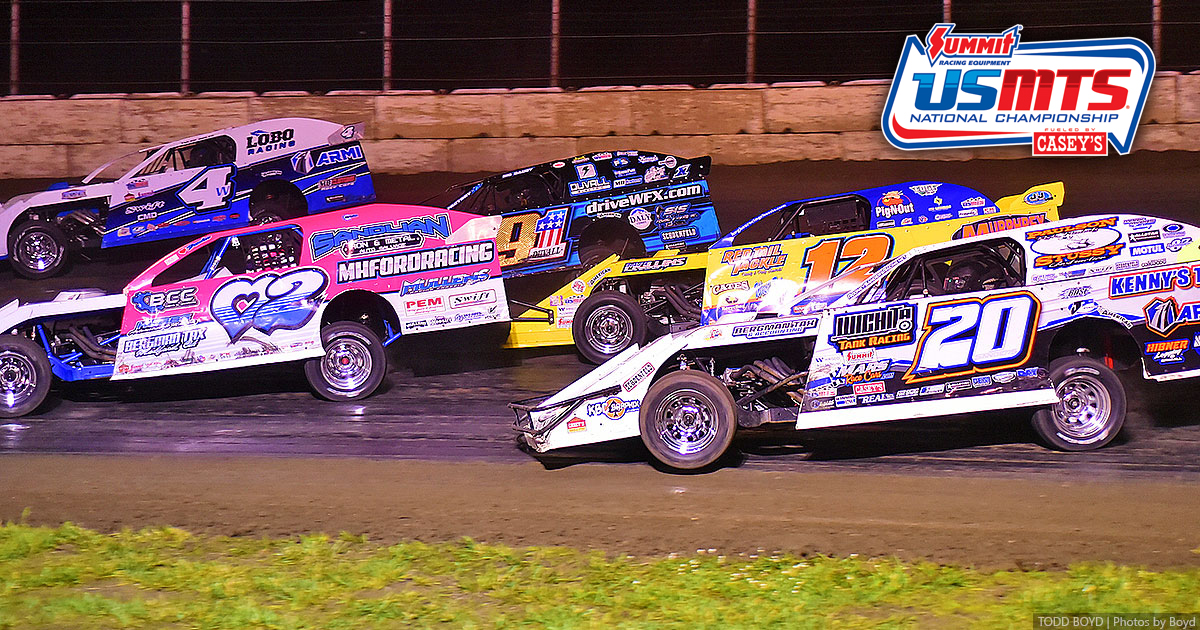 The Summit USMTS National Championship fueled by Casey’s embarks on a titanic three-day excursion this week with stops at three of the most exciting and popular dirt ovals in Kansas and Missouri.

Action gets going Thursday at the 81 Speedway in Park City, Kansas, followed by the 14th Annual USMTS Summer Fling at the Humboldt Speedway in Humboldt, Kansas, on Friday. The weekend concludes Saturday with the 11th Annual USMTS Slick Mist Show-Me Shootout presented by Foley Equipment at the Lucas Oil Speedway in Wheatland, Missouri.

81 Speedway this Thursday: FOE Enterprises, LLC, announced the purchase of the 65-year-old 81 Speedway last December and the new owners, including promoter John Allen, have been busy ever since as they remake the family destination with countless improvements including new stadium seating and other enhancements.

The changes were evident and welcomed when the 3/8-mile clay oval visited here June 4. Driving a second Hughes Chassis out of the Ramirez Motorsports stable, Ryan Gustin raced to his 103rd career victory.

It was Gustin’s third victory at the 81 Speedway but defending USMTS national champion Rodney Sanders leads all competitors with five career wins here including last November’s Chisholm Trail Showdown. That same weekend at the end of the 2019 campaign, Jacob Bleess captured the Grant Junghans Memorial to put a bow on a long and illustrious leadership of the facility by C. Ray Hall and his family.

Alternative Pest Management USRA Modifieds (show up points), USRA B-Mods, AutoTech Service Street Stocks and Mod Lites and are also on the card with pits opening at 4 p.m. and grandstands at 5:30. Hot laps begin at 7 and racing gets underway at 7:30.

General admission tickets are $20 for adults while seniors and members of the military are just $18. Kids ages 10 and under get in for free. Pit passes for those ages 11 and older are $35 while youth ages 5-10 are $15. Children ages 4 and under are admitted to the pits at no charge. 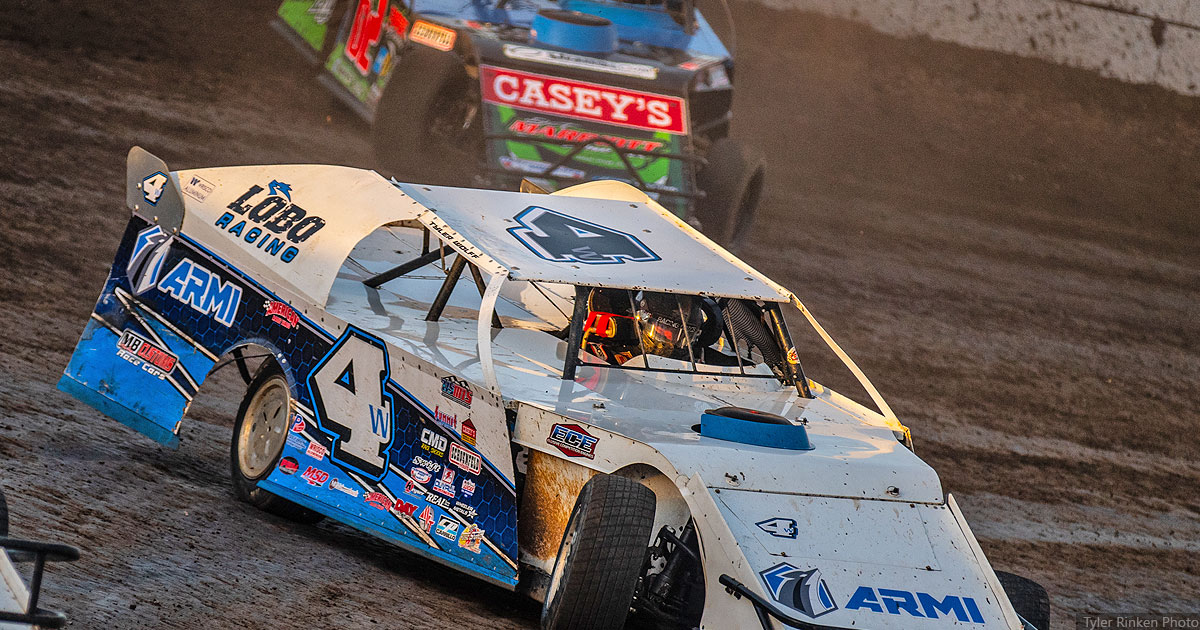 Humboldt Speedway fires Friday: When the Humboldt Speedway hosts the 14th Annual Summer Fling @ The Bullring it will be the 53rd feature race for the USMTS at the 1/4-mile semi-banked clay oval.

Nineteen different drivers have tasted victory at ‘The Hummer’ since Johnny Bone Jr. won the inaugural event here on June 28, 2000, but the all-time wins leader is Jason Hughes with 13 trips to victory lane here.

Stormy Scott has been a winner at Humboldt six times while Kelly Shryock is a five-time winner, including the first King of America event in 2011, and Ryan Gustin got his fifth earlier this spring. Rodney Sanders has four wins here.

Bone is a two-time USMTS winner along with Terry Phillips, Jason Krohn, Johnny Scott and Zack VanderBeek. Drivers getting to the winner’s circle just once include Tim Donlinger, Jon Tesch, Steve Holzkamper, William Gould, Jeremy Payne, Mitch Keeter, Kyle Strickler, Lucas Schott and Ricky Thornton Jr., who was the most recent winner here more than a year ago at King of America IX.

The USMTS Modifieds will share the spotlight with Ray’s Metal Depot USRA B-Mods, Mod Lites and Midwest Mods. Gates open at 6 p.m. and qualifying begins at 8.

Grandstand tickets are $20 for adults while seniors age 65 and older are just $18. Kids ages 6-12 get in for $5 and a limited number of reserved seats are available for $25 each. Order tickets online at humboldtspeedway.com. 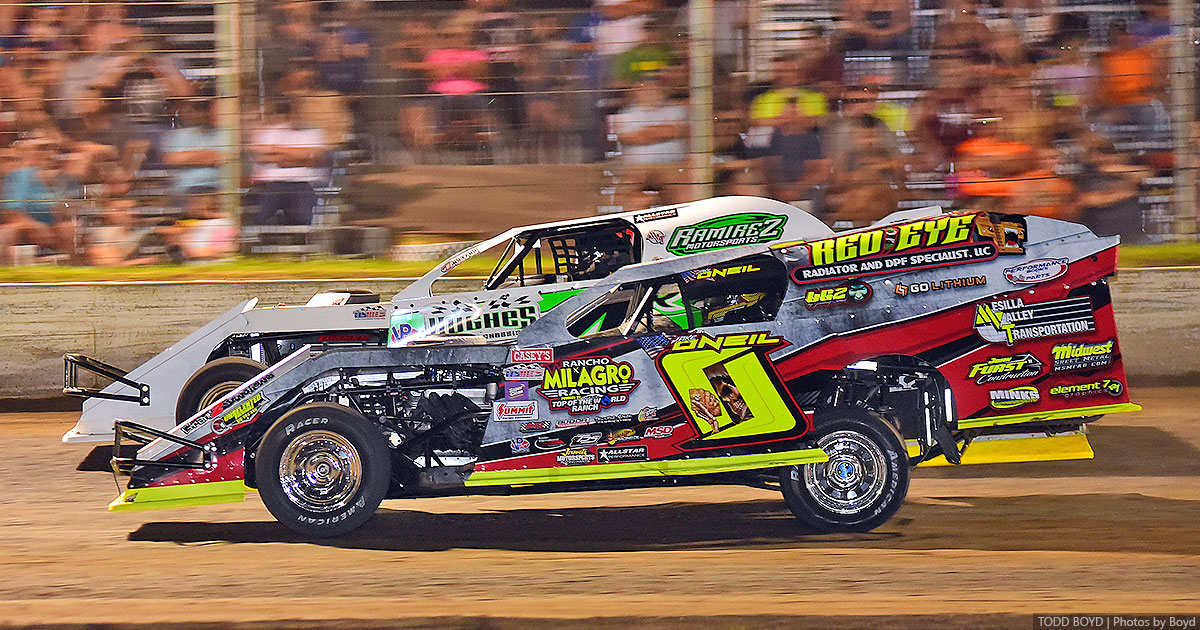 The Humboldt Speedway is a located 0.1 mile west of US 169 at the Humboldt Exit, then 0.5 mile south, then 0.9 mile east on Georgia Rd. The physical address is 1663 Georgia Rd, Humboldt, KS 66748. Follow on Facebook and Twitter to learn more.

The 11th annual Slick Mist Show-Me Shootout presented by Foley Equipment will headline a big night of action with $3,000 going to the winner of the feature. Also in action will be the Ozark Golf Cars USRA B-Mods, O'Reilly Auto Parts Street Stocks and American Racer USRA Stock Cars as a special guest class with a $400-to-win feature.

"The USRA Stock cars put on a good show when they were on the mid-week program with the USMTS back in June and we're excited to have them back," Lucas Oil Speedway General Manager Danny Lorton said. "Along with the B-Mods and Street Stocks, this will be an outstanding night of racing."

Phillips, who is the all-time winningest driver in the history of the Lucas Oil MLRA, has 32 career USMTS victories the only two-time winner of this event.

Dereck Ramirez of Woodward, Oklahoma, earned the Show-Me Shootout victory at Lucas Oil Speedway one year ago. Ramirez has four series wins in 2020 and enters this week second in the championship chase, 114 points behind Rodney Sanders of Happy, Texas. Sanders has six feature wins this season, pushing his career total to 103 as he seeks a fourth USMTS national championship. Sanders won this event in 2019.

Stormy Scott won a thriller here in 2018 one year after the 2017 show was rained out. Zack VanderBeek, Johnny Scott, Ryan Gustin, Jeremy Payne, Jason Krohn and Kelly Shryock have also won with the USMTS at the Lucas Oil Speedway.

Along with regular ticket options, fans have the "Beat the Heat and Get a Suite" opportunity with individual tickets $40. Spectators can sit in air-conditioned comfort or view the action from seats outside, overlooking the front stretch. Contact admissions director Nichole McMillan (417) 282-5984 for more info. 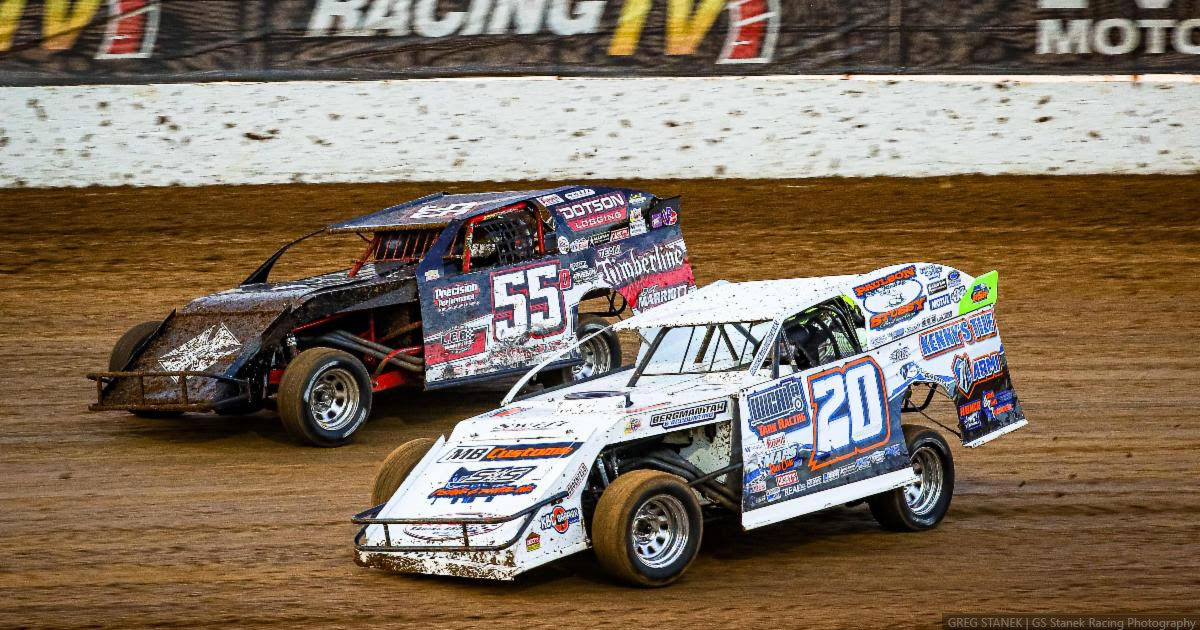 Complete Lucas Oil Speedway event information, archived race recaps, previews and driver features, along with ticket information and schedules can be found by visiting lucasoilspeedway.com. In addition, fans can get social on Facebook, Instagram and Twitter.

Lucas Oil Speedway is a 3/8-mile semi-banked clay oval located 0.2 mile south of US 54 on SR 83, then east. The physical address is 18842 Speedway Dr, Wheatland, MO 65779. A campground with shower and bathroom facilities is also available. With its entrance located just outside the pit gate this sprawling scenic camping facility will continue to enhance the racing experience at the Diamond of Dirt Tracks.

Lucas Oil Speedway is considered by fans, drivers and industry insiders to be one of the top five racing facilities in the nation. Located in Wheatland, Missouri, approximately an hour from Springfield, Missouri, and just an hour and a half from the Kansas City metro area, the "Diamond of Dirt Tracks" lives up to its title.

Davis holds a slim 21-point advantage over Iverson in the Grant Junghans USMTS Rookie of the Year standings with Skyberg, Tanner Mullens and Nathan Hagar completing the top five in rookie points heading into an August 6-8 tripleheader.

Currently, the 2020 schedule for the Summit USMTS National Championship fueled by Casey’s is highlighted by 44 nights of racing at 27 unique dirt ovals for the 22nd season of competition for the world’s Best of the Best in dirt modified racing.